Share:
Abstract: The author discusses standards and practices in tactile graphics, along with some related braille formatting including information relevant to the use of Duxbury and the Tiger embosser

In 2011, the Braille Authority of North America (BANA) published a book titled Guidelines and Standards for Tactile Graphics, 2011 .  The publication can be downloaded as a PDF file for free from the tactile graphic section of the Braille Authority website at: http://www.brailleauthority.org/tg . 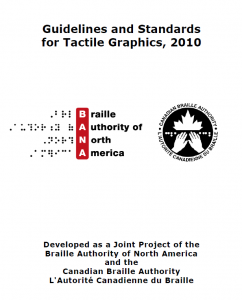 Figure 1:  Front cover of the BANA Guidelines and Standards for Tactile Graphics, 2010 book.

The book explains the braille formatting style of elements on a worksheet or textbook page (headings, titles, list, directions, paragraphs, etc.) and their placement arrangement on a tactile graphic document.  The first seven units are of particular importance.  Following standards explained in these units could generate school-base tactile graphic documents similar to layout placements in textbooks and/or testing materials.

Responsibility to the Student

The production of school-based worksheets and reference materials have always included some formatting structure, however the tactile graphic layout and formatting styles have varied greatly.  The concern was that school-based tactile graphic document layout differed from testing material graphics and textbooks.  Teachers of students with visual impairment would teach students how to read and interpret tactile graphics that appear on state high-stakes testing materials while receiving worksheet documents from local production centers in a different format.  This situation could add to the cognitive load of the student.

Cognitive load is essentially how much thinking a person needs to do during a task or activity.  A student with a visual impairment has to develop skills in three areas in order for him to learn content within the instructional environment.  The skill set includes:

Reduction of cognitive load of the student depends on how familiar he is with skills required in each of these areas to actually learn the content.

Braille and tactile graphic documents produced in a consistent format, regardless of the information content (textbook, high-stakes testing, or school-based documents), means that students only need to learn one formatting and style layout.  Since textbooks and high-stakes testing materials follow the guideline standards, it would also make sense to develop school-based instructional materials this way.  Predictable layout on all documents can reduce time spent searching, retrieving, skimming and reviewing information.  The student can spend more time learning the content instead of understanding the layout of a document.

Regular print worksheets that include an illustration usually consist of a series of “document elements”.  These elements make up the format of the worksheet.  In print versions, the layout of these elements varies greatly.  Some common elements used in printed worksheets are:

Here is an example of a 6th grade math school-based worksheet: 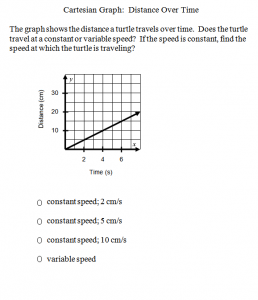 * If there were only questions without answers then the format number combination would be (1-3).

If there is room for all content on one page, the same 6th-grade math worksheet (displayed below) contents elements arranged according to the BANA Guidelines and Standards for Tactile Graphic, 2010. 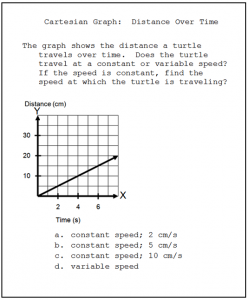 Figure 3: School-based worksheet where the elements are rearranged. The order of the arrangement is listed below.
BANA Guideline Arrangement of Elements on a Tactile Graphic

Below is a typical mathematics worksheet from a 6th grade class.  When a braille production center receives this worksheet via email or hardcopy several decisions are considered before producing it as a tactile graphic document. 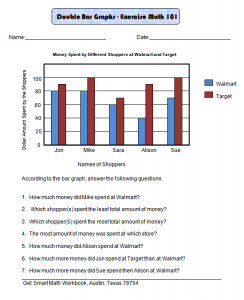 According to the Guidelines and Standards for Tactile Graphics book Unit 3, Section 3-3, here are some questions to consider:

Elements to consider for production are identified as these 11 on this particular print document. 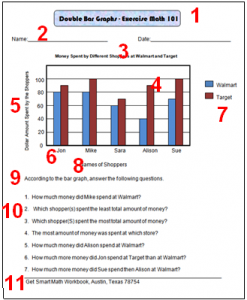 Figure 5: School-based Math Worksheet; 1-11 numbers are positioned next to or over particular style elements contained within the document.

This document is basically divided into three sections:

Putting It All Together

Figure 6: Screenshot of a word document

The Styles task pane is activated with an arrow dash line starting at the Title style and pointing on the Word layout at a line of text that is changed to that particular style.

The content section consists of text information that can be translated into braille.  Titles, headings, directions, captions, questions and answers are a few examples where braille text is directly entered on a Word. Each text elements is then assigned a BANA template style. It is now saved in Word and closed.  Be sure to save it as a .doc (Word 97-2003) document instead of the default .docx (Word) document.

Next it is opened in Duxbury 11.2. At this point the text is translated into braille.  Be sure to include at least one MathType number in the text or else it will not translate numbers to the questions in the Nemeth numbering format style. 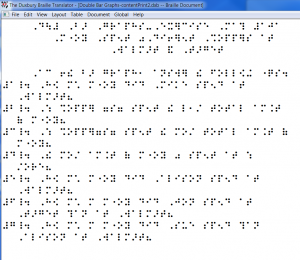 Figure 7: Screen shot of a Duxbury layout window with text translated into a braille font.

Check again for braille formatting as well as braille text errors within the document.  Corrections may have to be entered manually by the six-key entry method that include the use of these keys s-d-f-j-k-l.  Cells 1,2,3 are keys f, d, s and cells 4,5,6 are keys j, k, l.

On documents prepared for Tiger translation and embossing, all braille styles need to be formatted manually. One way to format manually is to activate the gridline and set vertical and horizontal spacing at .25″.  This width is somewhat similar to the width of a braille cell. Doing it this way makes it easier to count blocks to the correct placement of each braille format element.  Configure and activate the gridlines by first opening the “Drawing Grid” dialog window in Word. 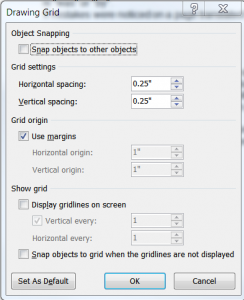 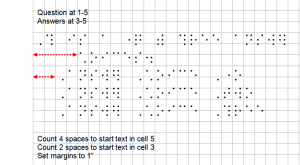 If mistakes were noticed on a page translated by the Tiger Software Suite, braille can be type in using the regular letter keyboard except for contractions and special symbols.

This chart displays the special character key symbol and its braille contraction equivalent. 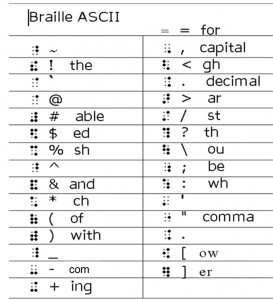 The ending transcriber’s note symbol (same symbol as the opening) is entered right after the last word in the key. There is neither a blank space following the beginning symbol nor before the ending symbol. The symbol consist of dot 6 in the first cell and dot 3 in the next cell.

Figure 11: Screen Shot of the Transcriber’s Note Symbol.  The first cell has a dot 6 and the second cell contains a dot 3.

The word “Key:” (k is capitalized and a colon is included) must follow the transcriber’s note on the next line (no space) starting in cell 7. Key information follows after a blank line space. If the key contains tactile graphics such a line, point, or area fill patterns, then the text content starts in cell 6 with runover in cell 8. Area fill pattern need to be at least one inch in length.

Example of the Transcriber’s Note and Key Page 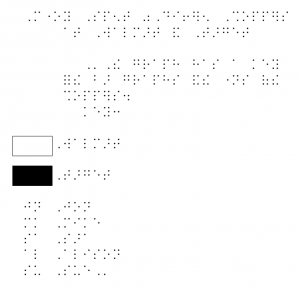 On the tactile graphic page, all text and labels are positioned manually.  It is best to “float” the text in textboxes.

The title of the document is repeated on all pages of the worksheet. They are a centered heading.

All key information (lines, points, letter combinations, area fills) have to match the content on the tactile graphic.

Example of the Tactile Graphic Page 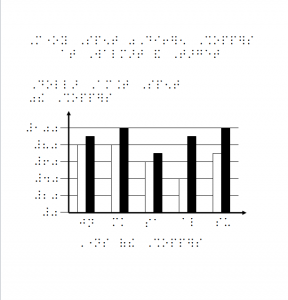 Figure 13: Screen shot of a tactile graphic section document that is translated into braille.