Transition: Making It Up As We Go

Share:
Abstract: Melanie Schacht describes the creative solutions that she and her daughter Maddie have discovered to help Maddie transition from high school to work and independent living.

Maddie has Cortical Visual Impairment and multiple disabilities. She was born with a rare birth defect called a diaphragmatic hernia. Most of her disabilities were caused from a stroke she had while she was in the Neonatal Intensive Care Unit.

When she was fourteen, we started attending every transition meeting in her district that I could find. We also got connected with the Texas Parent to Parent organization and attended their annual conference (additional information on Parent to Parent can be found in the News and Views Section of this issue of TX SenseAbilities). Attending that conference gave me a wealth of knowledge in just a few days. Before going to the conference, I felt very unsure about the things we had to do to get Maddie ready for adulthood. After I left that conference, I felt much more confident. Because there is so much information to know about transition, I attended some of the same trainings from Leander ISD and Parent 2 Parent over and over again until I felt that I had a grip on it.

Maddie has been in the 18 + program in Leander ISD for a few years. This is a program for students that have finished 12th grade but still aren’t ready to go to work or college yet. Students can attend this program until they’re 22 years old. They go out in  the community and volunteer at different places in hopes of getting paid employment.  Maddie had a job coach that went with her to work until she could handle it on her own.  Last year, she started working at the At Home store.

When Maddie was younger, she listened to everything I told her to do without question.  We didn’t have much conflict. I was the boss and that was it. She was always very compliant, but that has changed over the years. Now Maddie is twenty-one. She’s an adult and she wants to be independent.

I have had to learn to work with her. One of the things I learned in transition is to back off and let her do things on her own. It’s been one of the hardest things to do. For example, I have to step back and let her struggle opening a water bottle. As a mother, it’s hard to not do everything for her. Things she struggles with are so easy for me to do.  Most of the time, when I let her do it, she succeeds in opening her water bottle. It might take her longer, but she needs to feel that she can do things without my help. At this time in her life, she wants to do things her way. Because I have always been a very protective mother, it’s been hard to let go and let her become more independent. My way of protection is to control everything. I’ve had to find ways to let her be an adult and find her way in life. Each thing she accomplishes by herself helps her be more confident. It’s an ongoing learning process for both of us. We’ve both had to figure this out together. Here are videos of Maddie preparing a meal in the kitchen, pouring and stirring.

Maddie has come up with several requests over the last couple of years. She wanted to have her own money, move out, and go places without me. Being able to go places by herself was a big deal to her. We live outside of town, so getting around without me has been difficult. My husband and I both work and the rest of our immediate family are in Austin. Because she is intellectually delayed, she can’t drive, and if she were to ride the bus, she might get off at the wrong stop or get lost. We had a lot of obstacles to overcome.

I opened a bank account for her, and she has a debit card now. Her account is attached to my account so that I can manage and take care of it online or with a banking app.   Maddie really loves to use her debit card and buy coffee. That’s her favorite thing to do now. She loves to buy those fancy, overpriced, coffees. If you’re with her, she’ll buy you one too. Sometimes I have to tell her to slow down with her spending because I don’t keep very much money in her account. 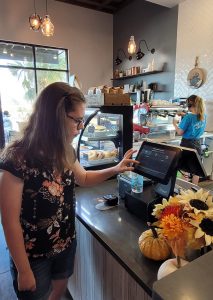 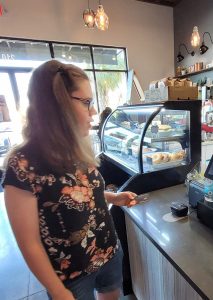 Maddie is ready to check out with her debit card.

Maddie really wanted to go somewhere by herself without me. I found a local rideshare service called Jennifer’s Rideshare. It’s a new company that was founded by a gentleman that is also disabled. We put his number in Maddie’s phone. Maddie will let me know when she wants to go somewhere, and she texts the rideshare to arrange her ride. When Maddie gets in the car she will text or call me. I have the Life 360 app on my phone so I can see where she is. Usually we use the service to get her to work and back.

Maddie would still like to move out of the house. We did tour an apartment, but it was pretty expensive. For now, it’s more economical for Maddie to live with me. I’ve heard that once Maddie comes up on the waiver lists, she can qualify for housing assistance, so that might be an option for her in the future.

When it comes to transition for Maddie, we are making it up as we go, based on what she wants or needs. Having her own job and bank account has helped her feel independent. Also, the debit card allows her to pay for things without counting money.  The rideshare is what she loves the most. All of these things have helped us on our journey to figure out what works best for Maddie. They’re little things, but she’s happy. 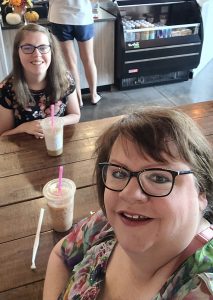 Maddie and her mother enjoy coffee drinks together. 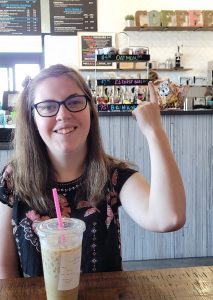 Exploring Opportunities: Discovering Myself In College While Studying Abroad