Share:
Abstract: The following is an article based on an interview with TSBVI student, musician, singer and songwriter, Devin Gutierrez.

On April 17th, 2019 Devin Gutierrez and I met for the first time to conduct an informal interview for this article. Devin is a thoughtful and gregarious young man, who likely never met a stranger. He is currently attending TSBVI’s EXIT Program, where he said he is learning “the independence skills and confidence to go out and do what I want to do.”  And what does he want to do, you may ask? “Play more music, have some gigs and write more songs!” 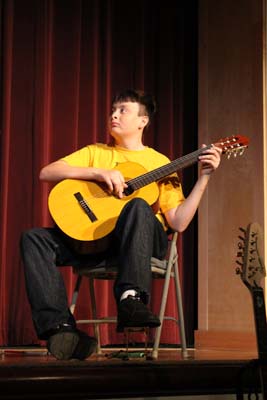 Devin singing with a band at a holiday event in 2017.

Devin has attended TSBVI a number of times over his school career. While participating in the EXIT program, he is currently serving as the Teaching Assistant for the TSBVI Jazz Ensemble in which he also plays the piano and occasionally percussion. He also recently composed a song that was developed into a music video. He said that he had been working on that song for a while when TSBVI Fine Arts Teacher Gretchen Bettes encouraged him to finish it…and the rest is history! The music video, entitled Special Ed, is musically very pleasing, funny, and contains some serious messages for the public about people with disabilities. Check it out! https://library.tsbvi.edu/Player/18540 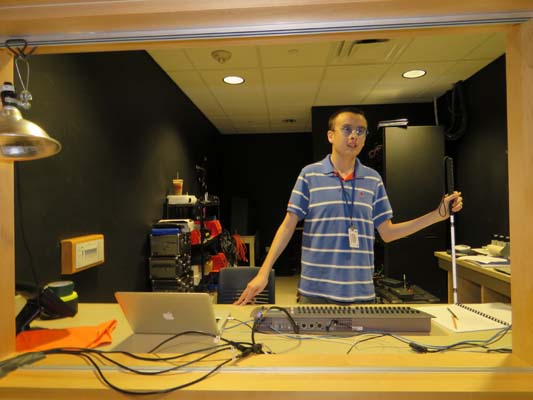 Devin in sound booth 2019. He served as the sound designer and sound cue operator for the TSBVI Spring Play.

In addition, Devin has some pretty impressive work experience. He previously worked part-time for the education company in Austin that creates the STAAR test and other educational materials. While there, he worked as a quality assurance tester, Beta-testing new software before it was released. He says that he used a computer and Braille Note to complete these tasks.

Since February, Devin has been volunteering at Disability Rights Texas, where he is in the process of testing the individual websites in all 254 Texas counties to ensure that they are accessible. This is done so that people with disabilities can access the information about the location of their polling place and other information needed for them to vote. Devin uses a spreadsheet that lists each county’s website to keep track of his work. After completing the testing for each county, he is then required to write a report and send it to his supervisor. The information he collects will then be used to encourage Texas counties to include the necessary voting information on their websites in a format that is accessible for people with disabilities.

When going to work and other locations about town, Devin uses Metro Access, which is a door-to-door transportation service available through the local transit authority. He indicated that he uses Metro Access instead of the regular city bus because he has hearing loss in one ear. Unilateral hearing loss can make it difficult to discern from which direction sound is coming. Difficulty knowing the direction of traffic noise can make street crossings a dicey situation. For that reason and others, some people choose to use a door-to-door transportation service. This typically involves providing your local transit authority with documentation of the disability or health issue that makes using the regular city bus unsafe.

Hearing about Devin’s accomplishments made me wonder how he arrived at this point in his life, with the confidence, skills, and talents he possesses. He said that his great-grandmother was very nurturing of Devin and his brother. She was also instrumental in teaching him to live according to a certain moral compass and to have empathy for others. He indicated, too, that she taught him to embrace his blindness and not be ashamed. Devin shared that his great-grandmother was quite protective of the two boys, though, and wouldn’t allow him to use the skills he was learning at TSBVI. He says that her “desire to protect and nurture me was a beautiful thing!” He would, however, encourage parents and other caregivers to have a more balanced perspective, both nurturing the child and letting them learn from their mistakes so they are ready for the “real world.” Devin emphasizes that “blind people are just as capable as sighted people.”

When asked if he had any information to share with educators, Devin encouraged them to aim high. “Each student is special and unique and equally as capable as anything you do. Don’t drop the standard just because the student has a disability.” He speaks of a 2nd-grade teacher who always pushed him to go further, as well as the TVI in his local school district, the support he received from the TSBVI Outreach Program and Region 14 ESC, and his teachers at TSBVI who encouraged him to pursue his musical talents.

When I asked Devin if there was anything else he would like to share with TX SenseAbilities’ readers, Devin said that he would like the word disability to go away and for people with disabilities to be treated with respect and understanding. “That is my dream for this world. I am not blind; I just see a different way.”

In regards to his future plans, Devin said that he is moving to Austin after he finishes high school so he can become active in the “Austin music scene.” He has already played an open mic at the Cactus Café on the UT Austin campus. Way to show ‘em how it’s done, Devin!