Share:
Abstract: The mother of a student with visual impairment describes some of her daughter’s many accomplishments, including being the head captain of her high school’s Color Guard Team and being invited to participate in the Macy’s Thanksgiving Day Parade. She is also a talented artist with her own Instagram page, Art Out of Focus.

“Fade to black” has life-altering effects when coupled with “malignant glaucoma.” This is not the ending to a movie—it is a life.

Sixteen-year-old Scout Sonnenberg was born with glaucoma and other complications as a result of a rare genetic anomaly close to Rieger’s Syndrome. She and her two older siblings, Silas and Sadie, have a myriad of complications including hearing loss, orthopedic malformations, and endocrine inefficiencies, as well as heart and spinal cord issues that were not fully discovered until Scout arrived.

Even as a blind baby, Scout was fearless. She took every challenge as an adventure. From a young age, she was fascinated with markers and paint and art related things. She began to draw in ways that amazed people. It seemed to soothe her. It was a source of joy and calm. 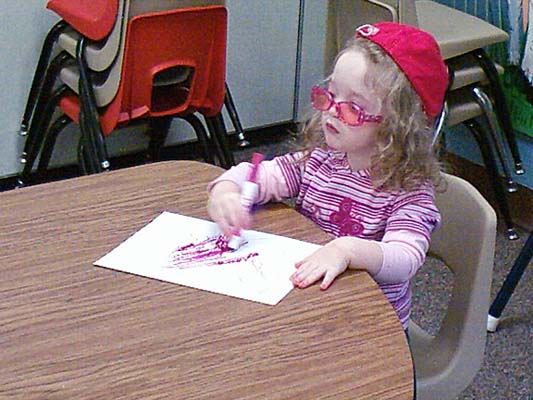 Scout drawing as a young child

As she grew, Scout added new adventures to her repertoire…like competitive swimming. She said the pool was a place she felt normal. She swam alongside and competed with sighted swimmers. She was eventually recruited by the Paralympics organization, but there was a hitch—Scout’s high school had no swim team. 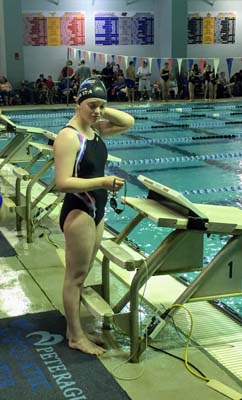 As Scout was in her last year of middle school, she began to plot. Knowing that she would have one year where she and her siblings would be all together in high school, she was determined to get out on the football field with them. Her soon-to-be senior brother was a percussionist. Her sister made Varsity Football Trainer as an incoming Junior, and Scout would be a freshman. She tried percussion too, but it became impossible to read music with her visual impairment. Aside from swimming, it seemed that sports were a no-go.

One evening at a band competition, Scout’s parents brought her out of the stands, close to the field so she could take in more of the action. As a whipping sound approached and a rush of wind spun by her she asked “What is that?” “That is the Color Guard—those are flags that they are spinning and tossing.” That changed everything. With urgency, she asked to hold a flag. Her sister’s best friend, Bailey, was summoned to the fence and handed over her flag. That was Scout’s ticket to that field her brother and sister loved so much. From that moment on, Bailey mentored Scout. Scout auditioned for and made the Frenship High School Color Guard. It seemed absolutely impossible and felt that way for her too many times. But she never gave up. And her Guard Instructors, Brian and Cindy Gruben, never gave up on her. As we began to discover during football season, the level of chaos on a football field, with a 350-member band toting instruments and uniforms and props, as well as more than 100 football players and coaches (add cheerleaders and spirit squads and photographers, etc., plus all of their equipment) was not a safe place for a kid who is legally blind. Enter Scout’s aide Ana (and eventually Dani). She had an aide just for Color Guard, her eyes to get her safely to her starting point and then safely off of the field. Everything else was up to Scout. 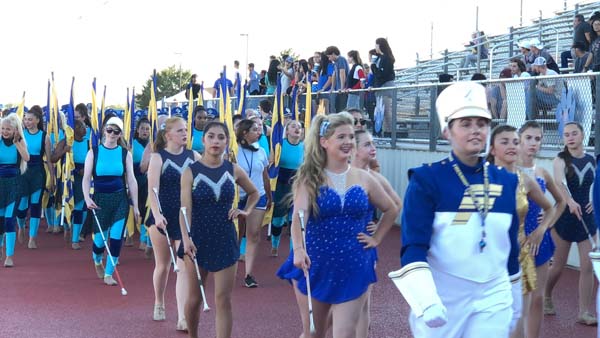 During marching season you can always find Scout with her baseball cap/visor and sunglasses In this photo, she uses her cane to walk with her Color Guard teammates as they prepare to march onto the field during halftime of a high school football game

She counted steps and used muscle memory just like she had done to conquer everything else in her life. She threw tosses like every other guard member on the field (while her mom and dad held their breath.) She was covered in bruises some days and had some good cries, but more than that, she never gave up. She began to smile—all the time. Her chin was up now. Confidence was rising from within her. She landed those tosses. She began to win medals. As marching season faded, Indoor Winter Guard approached. Brand new challenges and exhaustion and new depths of determination appeared. Fewer cries, more bruises, fewer doubts, more sweat emerged as she pushed on. She lettered her freshman year after receiving a Division 1 on her solo. She had her name put on the back of her letter jacket in braille. She won outstanding guard member and was named to the circuit’s all-star team. 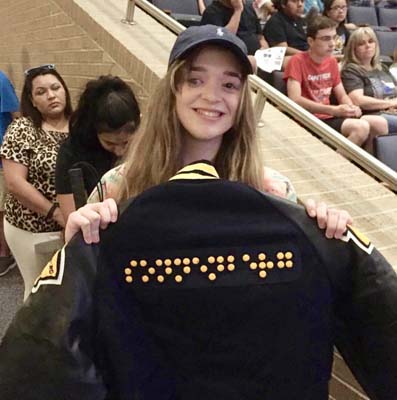 Scout proudly holding her letter jacket with her name in braille

Transitioning into her sophomore year, Scout had her eyes on a new prize: Varsity. This required higher tosses, more intricate choreography, more chaos on the field and the floor. She landed a feature in the marching show and did, indeed, make Varsity for the indoor season. It was very challenging—but Scout wanted more. 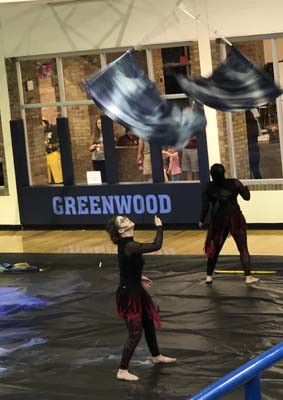 In the spring of her sophomore year, between her eye surgery (# 42) and another orthopedic surgery involving amputation, Scout  auditioned for and made “The Macy’s All-American Marching Band” and will be one of six high schoolers from Texas marching in New York City on Thanksgiving Day 2019 in the Macy’s Thanksgiving Day Parade. She has begun to fundraise to get there by selling braille bracelets and commissioning artwork. She has been invited to take AP (Advanced Placement) Art next year as a high school junior and will receive college credit for the course. Scout is in the Gifted and Talented program at school and is a high academic achiever with many high-level college courses for dual credit. She will graduate from high school with enough credits to be almost a junior in college and is in the top 4% of her class of almost 700 students. 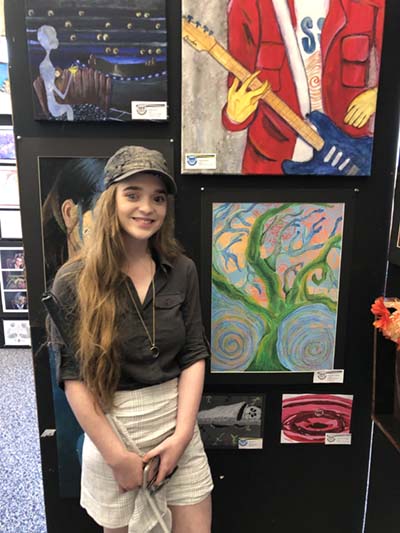 Scout stands in front of a display of artwork at the Frenship Showcase for the Visual and Performing Arts. Her drawing of a tree, in the bottom right corner, was submitted by her art teacher and selected for display. More of Scout’s work can be seen on her Instagram page: https://www.instagram.com/art.outoffocus/.

Scout’s Zentangle drawing of a lightning bolt. This piece won 1st place at the South Plains Art Fair when Scout was in 8th grade

Meanwhile, wanting to serve her teammates at home, Scout applied and interviewed for leadership in the band. She was just chosen to be the Caption Head (or top captain) for the Frenship Color Guard for 2019–2020. She has accepted this position with gusto and already has a notebook full of ideas for how she and the other captains can encourage and lead the Guard with positivity and teamwork.

We will keep you posted on Scout’s adventures in leadership and in New York as she represents Texas, and, as she says, she “shows people that even if you go through struggles you can persevere and give little ones coming up behind some hope.” 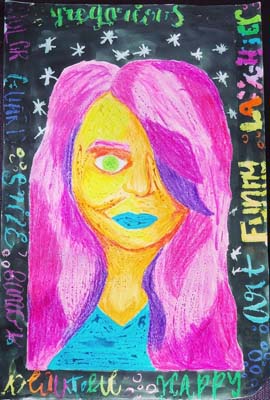 This art assignment was to paint a self-portrait similar to Andy Warhol’s paintings. The words around the perimeter are things Scout likes or how she would describe herself

Art Education at TSBVI: “We Make What We Want”