Share:
Abstract: The Outreach Media Coordinator, Kendra Dorty, relates some of the history of blind tennis and describes her experience learning about the tennis program at TSBVI.

The usual morning announcements echoed across the TSBVI campus: “I pledge allegiance to the flag…”, followed by the Texas Pledge of Allegiance, ending with a moment of silence. The morning routine proceeded to inform the students and staff of important upcoming events and activities – like what’s on the menu for lunch (I’m secretly hoping for steak fingers with a side of mash potatoes because that’s my favorite)! But on this morning, I was alerted to an announcement I’d never heard before, “Any staff and students interested in participating in TSBVI’s Tennis Team, meet in the gym after school.” Being an avid tennis player, I was immediately intrigued. When did TSBVI get a tennis team? Are there even tennis courts on campus? And perhaps the most obvious question of all—how does one play tennis if you’re blind? A year passed, and several steak fingers, before I heard the very same announcement. This time, however, in the spring of 2016, I ventured to the gym, and I soon learned the answers to all the questions I had wondered about from before. This is my discovery. 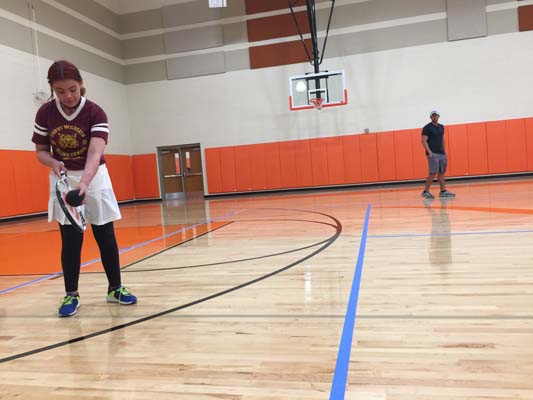 Blind Tennis originated in Japan by Mr. Miyoshi Takei in 1984. He was a student who was blind who wanted to play tennis, and with the help of his physical education teacher, he adapted the sport. They tested different types of materials by analyzing the height and trajectory of the ball and finally determined a foam ball was best. It evolved to have a little bell within the foam ball, which is the official ball used today (http://ibta-takei.com/). While the sport of Blind Tennis continues to expand internationally, it’s still relatively new, and bringing awareness about the sport remains a primary objective. “Nothing is organized. It’s in its infancy stage,” says Cindy Benzon, a representative of USTA (the United States Tennis Association) in Houston, who is the adaptive coordinator for Texas. “We’re really good at introducing, but following through and building programs is the hard part…. They have a lot of blind sports in the U.S., but blind tennis is not one of them.” (Lin, 2014).

When I arrived for the first practice of the season, Coaches Joe Paschall and Kristine Seljenes promptly began with a series of warm-up exercises. I wasn’t quite sure what my role would be other than helping out with whatever was needed – enlightening others with tennis knowledge or simply chasing down balls to help with drills. But it seemed that if the group of students in a circle on the wrestling mat could do jumping jacks, run in place, and hold plank for a minute, that I should do the same. At 6:30 am, I quickly began to wonder what I had gotten myself into. After a brief, but intense, warm-up, Coach Seljenes began to outline for the students the game of Blind Tennis, and just like them, I was eager to find out. 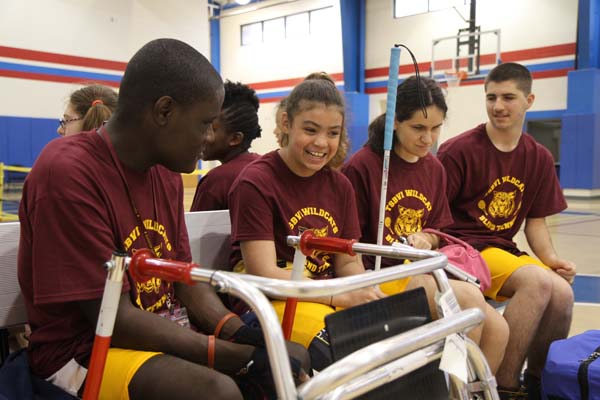 For the most part, Blind Tennis is comparable to conventional tennis: the scoring is the same, serving and returning the ball are the same, and by all means, the competitive attitude is equal. The biggest difference is the type of ball used, the court size, and how many bounces a player receives. In conventional tennis, players are only allowed one bounce to play the ball, but in Blind Tennis, players receive more. Without getting too technical, students with low vision typically receive up to two bounces in which to return the ball, while a student with no vision can receive up to 3 bounces. The court size for a player with some vision is slightly smaller than a regular court, while the court size is even smaller for players who are blind.

So how do players know where they are on the court? Paschall and Seljenes passed out tactile pictures of the court to students. Upon inspection, they quickly became aware of the court and where important boundaries were located such as the service line and the baseline. We then began to guide students onto the court to discover for themselves where to find the boundaries. The boundaries are taped off with a piece of thin rope so that the players know where to stand throughout the match. Depending on the score, players can independently move to the right or left of the service line to either serve or return. At the conclusion of this walk-through, the first practice was complete. We all received a glimpse of the origins of the game, how to play it, tactile information about the court, and even a warm-up. The TSBVI Tennis team was well on its way! What would we learn or do next?

The next few months consisted of regular practices and looked much like tennis drills I sign up for myself. Students were quickly transformed into competitive athletes!  Forehand and backhand drills were designed to encourage footwork and movement toward the ball, as well as making contact with the racquet and swinging through so the ball would go over the net. “They’re learning to move faster and in different directions,”  emphasized Seljenes. “You’re having to use both your vision and your hearing. You’re having to know how to move your body in a coordinated way in order to be successful in serving the ball and rallying the ball back.” Repeated serving drills instilled consistency with starting the point as well as practicing the verbal prompts that start every point, “Ready. Yes. Play.”  Before long, athletes were playing out points, games, and then sets together. While I remained at their side helping the coaches give proper feedback and reinforcement to their strokes, I soon turned into a ball girl to help facilitate their play.

Even with the existing modifications, like the smaller court size and additional bounces, the coaches continued to add adaptations that were tailored to specific students. For example, Coach Seljenes came up with an ingenious method for one of the students who had difficulty grasping the ball—she incorporated the use of a handheld scalp massager. This tool allowed the student to easily grasp the larger handle of the massager at the bottom while the foam tennis ball was nestled securely within the bendable wire arms. Utilizing this aid allowed the student to successfully hold the ball up to serve. Experimentation with textured gloves was also used with students who could benefit from having an extra grip while holding the racquet. Techniques like these were fueled by innovation and helped in the success of the students. Now they were ready to take these newly learned skills and have them on display during competition. 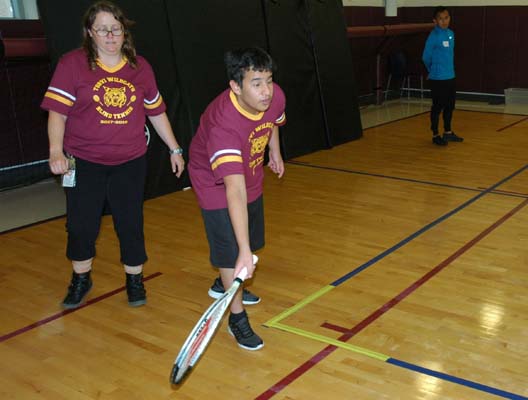 Although this was the second year since the school team had formed, it was the first year that I’d been involved and headed to a tournament with them! We traveled to Mission, TX where two other schools joined us for competition. It was the first time I’d seen our students compete with others who didn’t attend TSBVI, and while they were social and friendly off the court, they were fiercely competitive during their matches.  Every time I looked, the athletes were quick on their feet, moving to the ball, and working up a sweat. More importantly, they were enjoying themselves! “When I get the ball back and return serve, it makes me feel proud because I’m doing something that I accomplished,” athlete Jordan Price said. “The lesson I learned in tennis is to be confident in yourself – even off the court.” Fellow teammate, Juan Barboza, added that he had fun playing tennis as well and that it “would make me more confident in doing new things.” I was sincerely impressed with the commitment of the athletes and their dedication to improve throughout the season. In Blind Tennis, it is customary for the audience to remain silent during point play so that players can accurately hear the ball. Several times throughout the tournament, though, players got into an extended rally, and at its conclusion, the crowd erupted into cheers. In that moment, I felt truly honored and thankful to be a part of this entire experience. Coach Seljenes went on to say, “it teaches them discipline…focus…and that you need to practice in order to excel—at life, really.” From my observations, it appeared that the tennis players at TSBVI were tackling something they’d never done before and exceeding in their endeavors. I thought I was signing up to be the expert and mentor for the students on the tennis team, but instead, they turned out to be the mentors for me.

Since then, tennis at TSBVI has blossomed and more students are getting involved. Athletes are practicing at home on the weekends, and TSBVI even hosted its first tournament, in collaboration with other tennis associations around the community. Awareness of the sport is growing and the TSBVI Tennis Team is leading the charge. I can’t wait to see how the sport and TSBVI will expand in the future. Now, after we have a tournament, instead of wondering what’s on the menu for lunch, I’m waiting to hear the results of their competition, announced across the campus for all to hear and to give recognition for their amazing accomplishments. Every time, I think to myself, “Job well done!”