Paddles Up! Building a Dragon Boat Team at TSBVI

Dragon boat racing is a centuries-old sport that has been building in popularity at both the national and international levels. It is a team event that requires crews of twenty paddlers in forty-foot-long boats to match speeds in open-water races. Races are held across Asia, Australia, North America and Europe. There are local and international competitions and work is underway to include dragon boat in future Olympic games. On the west coast, dragon boat teams are appearing in colleges and high schools. Teams composed of blind and visually impaired paddlers are beginning to appear…

Within this context, Texas School for the Blind and Visually Impaired (TSBVI) has taken the initiative to form the first ever dragon boat team at a school for the blind and visually impaired. In 2015 and 2017, the team was fielded to compete in the Austin Dragon Boat Festival and Race. While no modifications in equipment or basic technique are required in order for the participation of blind and visually impaired paddlers, the undertaking was much more than simply handing students a paddle and seating them in a boat. Preparing for the race required significant problem-solving and task-analysis, and the results would impact multiple areas of the Expanded Core Curriculum (ECC).

Photo of of TSVBI Students rowing a boat

Racing a dragon boat requires considerably more skill and planning than a simple pleasure cruise in a canoe. In order for the boat to be propelled in the fastest and most efficient manner, it is essential that all paddlers be “in synch”; that is, everyone’s paddles should be striking and moving through the water at the same time. This creates a smooth, even and graceful ride. In contrast, being “out of synch” will cause paddles to collide and make the boat rock and lurch in a slow and ungainly manner. Among sighted paddlers, achieving synch is achieved through visual orientation: each paddler watches the person seated in front of them and tries to match their speed and rhythm. For our students, this was not an option so we developed a training schedule that allowed us to address their special needs.

Our regimen started some eight weeks before the race with an orientation in the school gym in which we covered basic concepts about the sport, using a set-up of chairs that replicated the array of seating in the dragon boat. After this we moved to pool-side practice in which students sat on the edge of the pool and learned correct technique for paddling. This was very important in helping students work on the orientation of their bodies and attend and respond to the sensory feedback received from their paddles as they move through the water. Next, we had everyone spend time paddling in three-man canoes. This provided everyone with the chance to practice the skills “on the water” and become accustomed to the feeling of being in a boat rocked by waves, but under close supervision by staff.

In addition to paddling, we had this entire time been stressing and practicing listening skills in following commands in order to move together as a team. These directions came not only in the form of voiced orders but also through rhythms beaten on a drum located at the front of the boat. Our prior training paid off so that by the time we boarded the real dragon boat for our first of four practices, we were well-prepared and this final round of practice cemented our readiness for the race.

The Austin Dragon Boat Festival takes place over two days in April. TSBVI raced as part of the “community team” category and participated in two races. Everyone wore their team jersey with pride and before each run, we made a spirit circle to chant our motto and raise our morale. For most of our students, this was their first opportunity to engage in a team sport and many had invited family members to attend the event. There was plenty of time between races to relax and interact with other community members. TSBVI was a big hit with everyone and received a great deal of support and encouragement from other teams. We learned that there is a blind and visually impaired dragon boat team in Houston and everyone was excited by the possibility that the two teams might someday be able to meet to race and compare notes. We did not place first in either of our two races but, as one of our paddlers stated, “It wasn’t about winning, it was about showing everyone what TSBVI can do!” 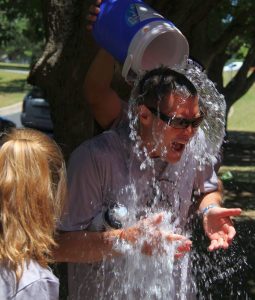