Disability is No Laughing Matter

Share:
Abstract: A college student with a visual impairment shares her experience coping with people who joke about disabilities.

Editor’s Note: I met Emily when she agreed to serve on a panel for a family workshop. I was impressed with her accomplishments, her confidence and saw her passion for mentoring others with low vision. Emily is a junior at Texas State University in San Marcos, studying Special Education and Sociology. She currently works at a children’s nursery. Outside of work, she loves writing, spending time with her fiancé and being outdoors with their two dogs. She enjoys helping animals and people in any way possible!  You may contact Emily at egp17@txstate.edu

Enough is enough. There are so many students with disabilities, and I know I’m not the only one. Some may be visible, some may not be. Yet there has not been a week that went by without me overhearing a joke about ADHD, Helen Keller or being deaf. What people don’t realize is that others around them might have a disability. 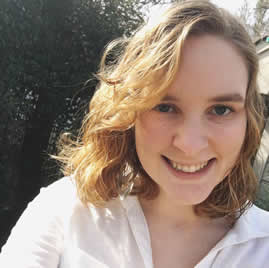 Personally, I am legally blind, and while some people may not realize it, others may make fun of it. Sometime last year, I remember stumbling over words on the ever popular Cards Against Humanity game when someone remarked, “What, are you blind?” Yes, actually, I am to an extent, I remember thinking. I used to shake off those remarks like they didn’t bother me. In reality, those words hurt – not because I have a disability, but because of the attitude that person had about it.

I have to wonder why those remarks are even worth saying and what someone would gain from it.

Having a disability, it seems like people either categorize me as a hero who overcomes it or a person who is unable to do anything at all because I’m different. At least that’s how I interpret people’s actions and attitudes. This mindset is actually quite harmful.

Someone says hurtful things like a blind joke and might try to cover it up by saying, “It’s a joke.” But I believe every joke has an element of truth for the person who said it. I’d like to think I’m as perfectly capable as any other able-bodied person in this world. I just have to adapt to my surroundings in ways others don’t. Hearing blind jokes makes me feel set apart from everyone else, like having something to deal with in life is something to laugh at. This should not be the case.

Not everyone has interacted with someone with a disability, however, so maybe the problem isn’t the people who say them, but not knowing the jokes are a problem in the first place.

“Did you hear about the new Helen Keller doll? You wind her up and she bumps into the furniture!” This is not the worst of the most common jokes about Helen Keller I’ve heard. I’m sure some of you reading this may find that joke funny, but to me, Helen Keller was an incredible woman. She achieved so much despite many people thinking she was incapable of doing anything. The truth is, every person has things to overcome in life, whether they’re financial problems, family problems, or a challenge that might be related to his or her disability. None of these are a laughing matter, so why make it that way?

No one likes to be seen as different or incapable compared to other people, and this is exactly what joking or teasing can do to a person. Personally, I don’t mind talking about my disability, but I don’t like people staring or making jokes about it, and I don’t believe anyone else does either. I often hear people exclaiming, “Wow, I’m blind!” when they can’t find an object that happens to be in front of them. More often than not, that person is actually not disabled, and it bothers me because they know nothing about that disability.

No matter how much a disability affects someone’s life, I believe every one of us would rather be looked at as a person with interests, values and opinions just like anyone else. Having a disability means we adapt to our surroundings in ways others do not, and that makes us unique. People should be more aware of what they say, and remember that age-old saying of “think before you speak,” because what you say does actually matter.

From Home, to School and Into the Community