Share:
Abstract: Camp Abilities is an overnight, developmental sports camp for children and youth with visual impairments, blindness, or deafblindness. Their first goal is to empower blind, visually impaired, and deafblind children and youth to become active in sports.

How It All Began

Camp Abilities was founded in 1996 by Dr. Lieberman, a Distinguished Service Professor in the kinesiology, sport studies, and physical education department at SUNY-Brockport. Dr. Lieberman’s interest in working with children who are visually impaired was inspired by Dr. Lepore, a professor in the department of kinesiology at West Chester University of Pennsylvania. When Dr. Lieberman was a student at West Chester, Dr. Lepore conducted a sports program for children with visual impairments each semester. Dr. Lieberman volunteered in the program and found that “working with someone with visual impairment was so different from anything I had done before.” “It was so rewarding, I knew I wanted to do it for the rest of my life.”

After obtaining her master’s degree from the University of Wisconsin at LaCrosse, Dr. Lieberman taught and coached at the Perkins School for the Blind in Watertown, Massachusetts. At Perkins, she gained first-hand experience in living and working with children with visual impairments and deafblindness. After she obtained her doctorate from Oregon State University, she landed at SUNY-Brockport, where she soon discovered that few students were graduating with experience in teaching people with visual impairments. She wrote a grant proposal and soon won funding from the Dorothea Haus Ross Foundation for a sports camp for children with visual impairments.

From this and other funding sources, Camp Abilities was born. With the help of Dr. Lepore, the first camp was held in 1996 at SUNY-Brockport and included 27 children, ages 9 to 18 years, and 30 volunteers. As local demand grew, Camp Abilities Brockport soon expanded to include 50 athletes. Soon the demand went national, and another camp using the same model, Camp Abilities Alaska, was established in Wasilla, Alaska in 2002. A third Camp Abilities soon sprang up in Tucson, Arizona in 2004.

Since then, the camps have kept mushrooming, from the most recent in Saratoga, New York in 2014 to locations as far away as Ireland, Finland, and Portugal. Dr. Lieberman’s goal is to have a camp within a half-day’s drive for every child with a visual impairment—in short, 50 camps in all 50 states. (For a complete list of Camp Abilities locations, visit http://www.campabilities.org/other-camps.html) 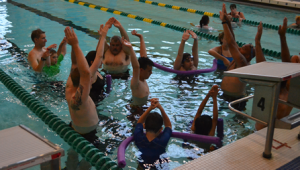 Participants in the Camp Abilities experience are profoundly affected for the long term. Often, athletes  become involved in their schools’ athletics programs after their camp experience. As they become more involved, members of their community begin to recognize them as athletes deserving of respect. Beth Foster, a long-time coach and now assistant director at two Camp Abilities locations explains, “It’s such a powerful thing to have all these athletes with visual impairments at a camp together and to tell them, ‘Yes, you can!’ All their lives, people have been telling them ‘You can’t do that.’ I have seen people come back every year and have seen them grow, break through walls and barriers, and say, ‘I can do this.’ It’s amazing, really powerful. And I get that same feeling at every camp I do,” Foster exults.

For Briggs, who is blind due to cone-rod dystrophy, Camp Abilities has “given me a whole different road I can take,” he says. “I never saw myself coaching a sport, but now I’ve learned that I really enjoy it.” Briggs—who is studying sports management at New York’s Alfred University, where he is on the track team—has been serving as a sort of talent scout, traveling to the various Camp Abilities locations to find gifted athletes with potential to excel at competitive sports events.

Foster says Camp Abilities has been a transformative experience for her, too. “If it changes my life this much, I can only imagine how much it can change [athletes’ lives],” she notes.

You, Too, Can Start a Camp Abilities

Camp Abilities has developed a replicable model and manual for starting another location anywhere in the world. Sometimes camps are even founded by parents of children with visual impairments who want their children to have the Camp Abilities experience close to home.

To be called “Camp Abilities,” the camp must be a sports camp for children whose primary disability is a visual impairment. Dr. Lieberman advises anyone who is interested in starting such a camp to begin by assembling a committed team and then reviewing the book she co-wrote with Haley Schedlin, M.S.: Sports for Everyone: A Handbook for Starting Sports Camps for Children with Visual Impairments.

The next task is to find a facility to host the camp. The facility must have enough space to accommodate the sports you plan to offer. Then, pick a date. Starting off with a long weekend and a small number of athletes works best, Lieberman advises. When the facility and date have been established, it’s time to divide up responsibilities among your team. These responsibilities will include food; equipment; orientation; health and safety; fundraising; and recruiting athletes, counselors, orientation and mobility specialists, teachers of children with visual impairments, sport specialists, and role models as speakers.

Another important step is to design a camp T-shirt and logo. The logo can reference something unique to the camp or to the local area. From there, the planning team should meet to report on progress in fulfilling responsibilities. At first, these meetings should occur once a month, then more frequently as the camp date moves closer. And finally, once the date and place have been decided, contact Dr. Lieberman at Ilieberm@brockport.edu with the dates, relevant contact information, and website so that they can post the information on their Camp Abilities website and help spread the word.

If all this sounds daunting, rest assured that the effort is worth it. “It takes so much preparation, planning, and fundraising, but the scene every year of the athletes and coaches’ not wanting to say goodbye makes it all worthwhile,” Dr. Lepore says.

Even if you can’t start a camp, Camp Abilities would like to invite all readers of this article to join the Camp Abilities family by volunteering for an existing program and/or by encouraging any child you know with a visual impairment to register for camp. Camp Abilities is also raising funds to produce a documentary on its camps all over the world and to mark its twentieth season; to contribute, visit http://www.gofundme.com/campabilities.

An Extraordinary Life: Tribute to Travis

Disability is No Laughing Matter