An Extraordinary Life: Tribute to Travis

Share:
Abstract: A natural and yet painful part of being part of a community is saying goodbye to beloved leaders. In December 2015, the Texas Deafblind Community lost a wonderful young man who led us by his example of how to live an extraordinary life on his terms. Following are two eulogies given by educators who had the privilege of working with Travis Dafft and his family for many years. 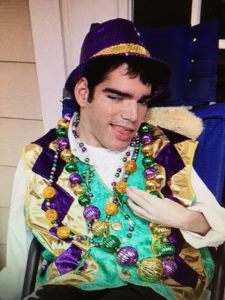 Looking out at you who have come together today, I see beautiful, bright, fun colors. I feel we are collectively sending a message to Travis that says the gang’s all here. It has been said that loneliness is the only real disability. Travis has always had a gang to hang with…

Through my career in deafblindness, I had the opportunity to connect with Travis, his dynamic mom and family when he was six years old. From the beginning, I knew I was much more on the receiving end of this relationship. I remember arriving at their home the first time to a fragrant herb garden and a home full of opportunities for exploration and participation. Travis grew, the house grew, the gang grew, and I grew. Over the years Travis’ herb garden and numerous other projects turned into volunteer work, job exploration, and a business plan.

You hear people ask, quite often, how can I find happiness and live a quality life? Jan van Dijk, the “Father” of Deafblindness asks: Well, what is quality of life? Is it having 30,000 words? Is it being a Mathematician? He answers: No, it is to be a positive person. And when are you a positive person? It’s when you have in your life Moments of Joy. Travis lived life as a positive person sharing Millions of Moments of Joy. A few of those moments include:

The Joy of Community: Travis enjoyed many activities in the community: chef classes, dance classes and more. Through his participation and determination, Travis motivated athletes, peers, and others to do their best.

The Joy of Generosity: Travis was able to not only receive but he was also able to give back to others. He experienced the joy of being generous through small and big deeds. Everything from offering a choice of beverage to his Dad after work to making meals for the homeless.

The Joy of Individuality: Travis was his own person. He had an engaging personality that touched the lives of many. He could let you know what he liked and what he didn’t like. There was that grin, telling eye gaze, and that Elvis smirk.

I’m sure you will be sharing many more moments of Joy you experienced with Travis during the reception and for years to come. Travis was never at risk for loneliness nor a life defined by educational files and assessments. His life story is full of interesting story lines and fun characters like you. Travis lives on as we hold his stories in our hearts and retell them.

My name is Andrea Cyr. I had the wonderful pleasure of being one of Travis’ teachers for many years. I started working with him when he attended Collins Intermediate School and continued to work with him until he graduated. I learned so much about Travis over the years and he taught me more than you could ever imagine!

Before I share some of those special memories, I wanted to take a minute to talk about Travis and his family. Travis was an incredible, handsome young man with a wonderful personality! He was full of life, and had a great sense of humor! Travis usually ran the show according to his rules. Travis was a fighter! He endured more that most of us will ever endure throughout our entire life, and he always faced it with courage and strength. We are so fortunate that God let us enjoy Travis for almost 25 years. He touched so many lives in so many ways while he was on this earth.

Travis was a family man! He loved his family! I was fortunate enough to see how he interacted with them and how much they meant to him. He would light up when they walked in the room and spoke to him. When he was younger, he enjoyed going to the air shows and watching trains with his dad. They had a special bond that couldn’t be denied when they were together. Travis was Jennifer’s Boo Man and she could always make him smile no matter what! Jennifer was always there when Travis needed her. He absolutely adored his big sister! Bill, I remember every Christmas, Travis and I would go shopping for his gifts, and he couldn’t wait to get to the tool department to buy you a new tool. He loved his brother-in-law! Travis adored being an uncle! When the kids came over, Travis would sit up straight and tall and he was so proud as he listened to them run around and play. Jackson and Christian would always come up to him and say “Hi Uncle Travy,” and he would get this huge smile on his face from ear to ear! But there is one person in this world who knew Travis better than anyone, and that was his mom, Teresa. I’ve never known a mom who fought so hard for her child! Teresa always made sure that Travis got what he needed to be successful. She was the most creative and innovative parent that I’ve ever met! Travis loved his mom with all of his heart and I know that he is in heaven now thanking God that Teresa was his mom. He’s looking down right now and telling her not to worry. He’s walking and talking and flying with the angels.

Now I want to share a few special memories that I shared with Travis. I could talk for hours, but I’ve narrowed it down to three that I remember the most. The first memory that I will never forget is the time that Travis basically kicked me out and told me to leave. Now, most of you know that Travis could be a little manipulative, to say the least! Occasionally, when he didn’t want to work, he would shut down and pretend he was sleeping. He was an expert at this. Sometimes he was so good that I had to ask Teresa if he was really asleep or if he was faking it. One particular day, I knew for sure that he was faking it. I tried everything to capture his interest that day, but he just kept pretending that he was sleeping. When frustration started to set in, I said “Travis, are you going to work today?” I’ve never seen a person wake up so fast. He cocked that head up and to the right in lightning speed! For those of you who don’t know, that was the way Travis said NO! So, jokingly, I looked right at him and said, “Travis, do you want me to leave?” He gave me the biggest smile and gave me his sign for yes faster than I had ever seen him answer. Usually he needed some wait time before he would answer, but that day, he answered immediately, so I asked him again, “Travis, do you really want me to leave?” This time, he not only smiled and said yes, but he vocalized with pleasure. I knew we were getting nowhere that day, but I wanted to feel like I won, so I said “Travis James Dafft, you little toot! I wanted to leave anyway!” As I drove home and processed what just happened, I got this overwhelming feeling of joy! First of all, I realized that Travis had mastered one of his goals. He answered three questions without any wait time at all. Secondly, what a great self-advocate! Travis sure told me that day! He taught me a valuable lesson! He made me realize how important it is to take the time to listen to our students. I think Travis was testing me to see if I would really listen. When I did, he respected me more. From that day on, he never did that again, because he knew that I would take the time to listen to what he was telling me.

The second memory I want to talk about is our yearly tradition. Every year, we would make a gingerbread house for Christmas. One year, we proceeded to make our traditional gingerbread house, but Travis had other ideas in mind! That sense of humor decided to peak that day. We finally attached the last part of the roof. I turned to get the candy and when I turned back around, Travis had that evil look on his face. Before I could move the house, he did it! He reached that sneaky hand up and knocked that roof off. Patiently, I helped him reattach the roof, and I kid you not, within seconds, he did the same thing again, and again, and again! So after the fourth or fifth time of attaching the roof and him knocking it off, I looked at him and said “What is your deal?” I stopped for a brief moment and remembered the day that he told me to leave, and I said, I’m not listening! Travis is telling me that he doesn’t want to make a traditional gingerbread house, so I need to take his lead. He gave me that smirk and I knew we would have to come up with a different option! I can’t remember what year this happened, but it was shortly after Hurricane Katrina, so we made a Katrina gingerbread house, equipped with blue tarp for the roof and knocked down trees. Travis was a happy camper with the finished product.

Now, for the final memory, and the one that is most dear to my heart! Well, as most of you know, Travis learned best by doing unit studies. We would study one subject for 3 or 4 weeks, or sometimes longer. Our favorite unit was when we studied Louisiana. We learned about the culture, the traditions, the language, the food, the music, and Mardi Gras. We cooked jambalaya and beignets, but Travis’ favorite was the king cake, and boy what a king cake he made! He had the bright idea that he wanted to put a filling in the center, so we decided to make a cream cheese filling. Wow! We stuffed that cake so full of filling that one bite was probably 500 calories! It was so delicious and I’ll never forget all of the sugar that Travis spattered everywhere! We definitely loved making that overstuffed Texas King Cake! One of our favorite things we studied during this unit was the music. There’s nothing like Cajun, Zydeco music. We started out listening to traditional Cajun, French music and then we moved on to more modern Zydeco music. There was one song in particular that became our song, and we used to listen to it every time I came over. In fact, Ginger used the music to that song to write Travis’ graduation song. It was by an artist named Horace Trahan. That song was called “That Butt Thing.” No matter what kind of mood Travis was in, all you had to do was play that song, and he would come alive! Because this song was so special to Travis, we wanted to play it for you now.

In closing, it was Travis’ sense of humor and personality that I will miss the most! I will always remember the special times we shared together and all of the things that Travis taught me! He will be missed tremendously! By the way, I downloaded “That Butt Thing” to my phone, so whenever I’m missing him, I can just play that song and remember all of the great times we had!