Keywords: Math Melodies is an app developed in Europe, especially for children with visual impairment or blindness. It is accessible with Voice Over or a refreshable braille display. It also has colorful pictures and animation.

Download Article (PDF)
Share:
Abstract: Math Melodies is an app developed in Europe, especially for children with visual impairment or blindness. It is accessible with Voice Over or a refreshable braille display. It also has colorful pictures and animation.

Math Melodies is a free accessible app for the iPad, specifically designed to help visually impaired children learn mathematics. The app is downloadable from the App Store and is available both in Italian and English language (German version will be available soon). 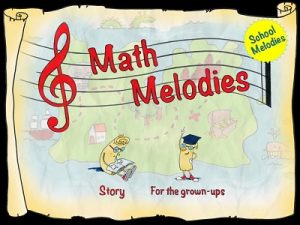 This first release is designed to support children from the 1st to the 3rd grade of primary school, and includes 6 chapters with 12 different types of exercise, each with a different level of complexity.

Math Melodies has been designed to overcome some of the challenges that blind and visually impaired children have to face in learning math: the app uses the audio feedback integrated in all iOS devices (called Voice Over) to assist the child in practicing arithmetic exercises while sliding the finger over the tablet.

The app can be used with a refreshable braille display, but it can also be enjoyed just by exploring the screen: this way the kids will also be able to perceive the bi-dimensional structure of the exercises, otherwise hard to figure out while using math software on traditional computers. 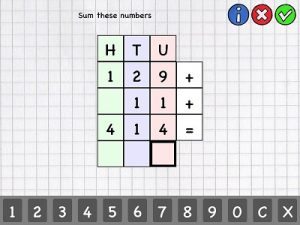 Examples of exercises can be the “counting animals exercises” (with the call of the animals reproduced with a funny sound) and the “animal position exercises”, but also tables with arithmetic operations, such as “operations in column” exercises, “operation charts” and the “hundreds square with missing numbers”.

Math Melodies is not only useful, but it’s extremely fun and entertaining while retaining its educational purposes! The exercises are immersed in a narrative context that guides the student through the learning process: there is a tale that is read to the children, enriched with music and lots of motivating sounds.

Even if the app is specifically designed for children with visual disabilities, it is also enjoyable by all kids (that’s why there are colorful and funny landscapes), thereby enhancing inclusion between visually impaired and sighted children. 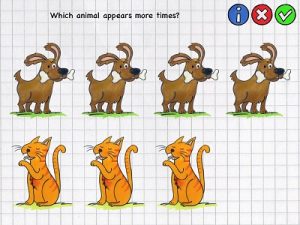 MathMelodies has been developed thanks to the funds collected through a crowdfunding campaign (http://www.indiegogo.com/projects/math-melodies), that allowed the team to raise 15.000€ (Euros, or about $20,000 U.S. dollars) and to distribute the app for free.

Now the team wants to extend the app to make it available to many more children; so they started a new crowdfunding campaign to raise funds to extend Math Melodies to the 4th and 5th grade of primary school.

The 4th grade objective (7.500€) has already been reached and now they are just missing the last step for the 5th grade. For more information and to contribute to their campaign you can visit http://schoolmelodies.ew-tech.it/index_en.html.

But the developers’ work hasn’t ended yet: their objective for the future is to extend Math Melodies to middle and high school, and why not to university as well, including graphs, functions and many more features and making this app a benchmark for math learners with visual disabilities!

The app has been developed by EveryWare Technologies, a spin-off of the University of Milan that develops applications for smartphone and tablet to support visually impaired people in everyday activities.

Among their apps there are Light Detector (that was the first iPhone app to detect light and transform it into sound) and iMove, which supports the orientation of visually impaired people and that has been downloaded almost 35,000 times worldwide.

The idea behind Math Melodies was born thanks to the experience of Cristian who, being congenitally blind, had to face some difficulties while learning math (even if afterwards he gained a PhD in Computer Science).

Some time ago, together with Sergio, they realized there was the need of an app that could teach math to visually impaired children in a fun, engaging and entertaining way. So they decided to develop it!

Sergio and his colleagues are always happy to receive feedbacks and comment about their apps, and at the moment they are looking for suggestions to improve Math Melodies, also to meet the needs of students with visual impairments in the US.

They invite you to try the app and, if you want any more information, please write to them.