Share:
Abstract: A father of a teen with visual impairment shares the lessons he and his family learned when his daughter attended middle school.

This past weekend, Scout participated in her 8th grade banquet, the culmination of her middle school career. Our family has had many adventures as we traversed the ever-changing landscape of middle school. Scout did not just survive middle school, but she thrived. We experienced some rough spots as we learned to create a successful environment for her, but she also had several raving successes, which were wonderful boosts for her self-confidence. I wanted to share just a couple of our take aways from middle school. 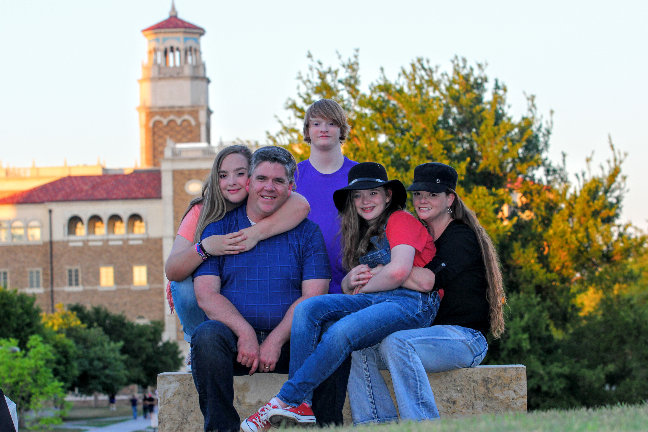 Photo of Scout with her family

Scout has congenital glaucoma. The progression of the disease and a couple of surgical complications have led to her visual impairment. She can see color in her right eye. Both of her pupils are blown so she suffers from severe photophobia. Scout has functional vision in her left eye, but her eyes tire easily. She uses an iPad and CCTV to enlarge schoolwork, and all handouts are enlarged on 11×17 blue paper to help reduce glare. Scout is the youngest of our three children. Her older brother and sister have paved the way for her academically. All three kids participate in the gifted and talented program. Our kids have attended all the same campuses and have had many of the same teachers over the years. Many of the middle school teachers knew of Scout before she arrived on campus. 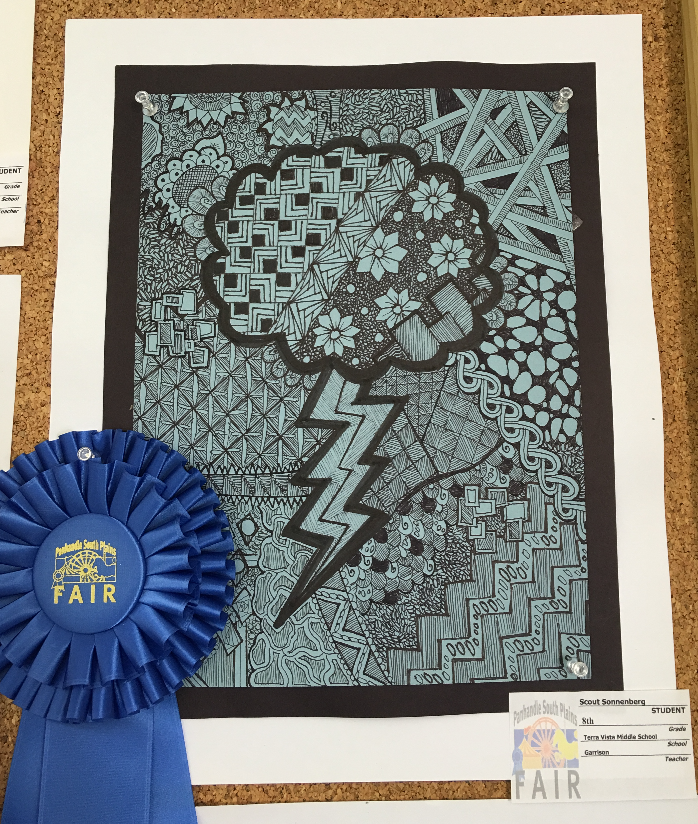 Here are a few things we learned during our journey through middle school.

Scout’s ARD meeting in 5th grade was lengthy and the room was packed. Administrators, teachers and diagnosticians from both her current elementary and future middle school were in attendance. Scout also attended this ARD meeting, her 2nd to attend. Current accommodations, and why they were needed, were explained to all new attendees. We requested that Scout receive any summer reading requirements for 6th grade English before the summer started and in a format which met her accommodations. In August, after the teachers had returned to work but before classes started we had a meeting with all of her new middle school teachers. Scout told her teachers about her visual impairment and how it affected her education. We discussed her accommodations and why they were necessary. For example, Scout has preferential seating in her classroom. The white board must be on her left side. We explained that because she has no vision in her right eye, she is writing and reading into her vision loss when taking notes. When the board is on her left side it reduces the strain and work required on her eye. After the meeting, we walked through her school schedule with her TVI and her O&M specialist. We met with each teacher individually, discussed where Scout should sit and where her CCTV should be located, and answered any specific questions that the teacher might have. We had this meeting before both her seventh and eighth grade year. Subsequent years had fewer attendees as we only met with new teachers. 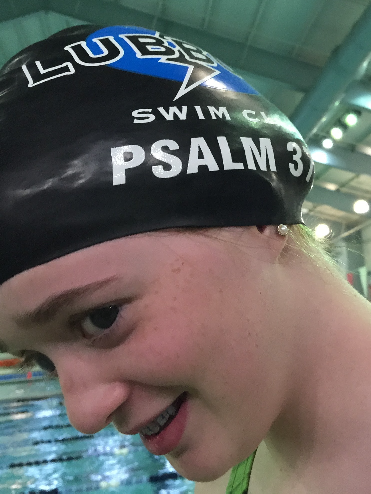 2. Know your principal’s preferences on handling questions, concerns and complaints.

Paula and I were both very involved in our kid’s elementary school, volunteering in the kid’s classrooms and serving on the PTA board. When issues or concerns arose with Scout’s accommodations, it was easy to stop in and chat with the teacher to develop a solution to the problem. We had a great relationship with the principal and teachers so this method worked well for us. Middle school was a different story and I wish I had known the principal’s preferred method of handling issues and concerns before I walked into a hornet’s nest. In sixth grade, Scout received a failing grade on a writing assignment. I called to speak to the teacher to determine the issue. By the end of the conversation, I was extremely frustrated and the teacher was being evasive on whether or not she was meeting Scout’s accommodations. Long story short, after our phone conversation, the teacher went to the principal’s office in tears and left school for the day. I received a terse phone call from the principal informing me that I was to bring my concerns and questions to school administrators only, never a teacher. This was not what we were used to but we did comply with his request. Suffice it to say, I already have discussed this with Scout’s high school principal and we are all on the same page. 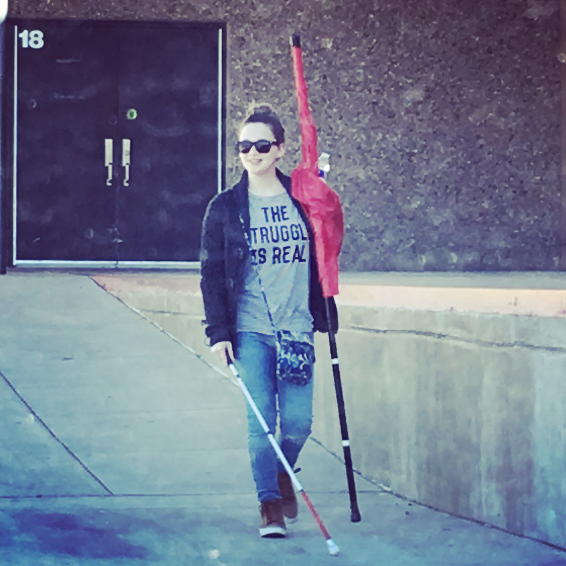 Scout’s middle school has seven class periods a day; five core subjects, one elective and one PE or athletics. Scout is exempt from taking a PE class for two reasons; her visual impairment limits what she can safely do in a regular PE class and she is a member of a competitive swim club who provides documentation of Scout’s participation. In sixth grade, Scout participated in Band and Art. She also was up late, sometimes until 11 p.m., working on homework. It takes her longer to complete assignments because of her vision, and swim club practice was every evening as well. In seventh grade, she had art twice a day as an elective. We would use her second art class to schedule sessions with her TVI, her O&M specialist as well as for local doctor’s appointments. Her art teacher would allow Scout to work on other homework assignments in her second art class, but Scout still was up late working on homework. In eighth grade we asked that Scout have a study hall as one of her seven classes so she could work on homework at school and have access to teachers if she needed assistance. The school was able to accommodate our request with some creative scheduling. Scout’s study hall was her last period of the day. Her study hall was in the Resource/Inclusion classroom, but during the teacher’s conference period. Scout was able to complete a large percentage of her homework each day during study hall, which allowed her to participate in swim club and still get to bed at a decent hour. We used this time as well for braille sessions with the TVI and lessons with her O&M specialist. The high school operates on a block schedule, four classes per day. We have arranged with her new principal that Scout will have three academic classes each day. Her fourth class each day will be one of her electives, Art or Color Guard. 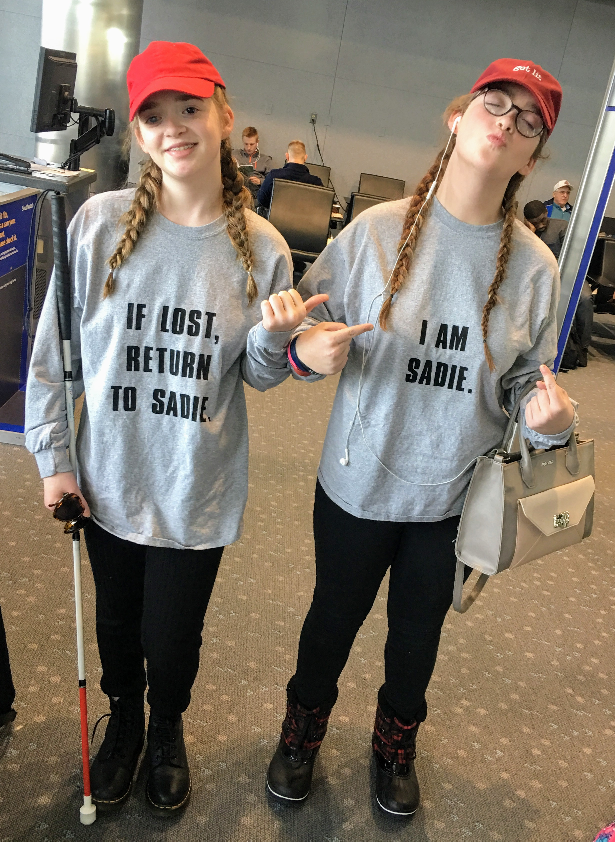 Photo of Scout and her sister, Sadie in matching t-shirts. Scout’s t-thirt has the message “If Lost Return to Sadie.” Sadie’s t-shirt says “I am Sadie.”

4. Small accommodations can have huge impacts.

Scout has some accommodations that are not included in her IEP. Scout does not eat her lunch in the cafeteria. The cafeteria has floor to ceiling windows and is extremely noisy. Scout started having daily headaches when she was in sixth grade. We realized that the combination of bright lights, loud students and tired eyes were causing her headaches. We asked that she be allowed to eat lunch somewhere other than the cafeteria and that she have a friend join her so she would not have to eat alone. During sixth and seventh grade she ate lunch with her best friend in the art classroom. For eighth grade she moved to the library since the art teacher’s lunch no longer matched up with Scout’s. Scout is also allowed to leave her classes early or arrive late to avoid traveling during the passing periods. She feels safer traveling the halls when they are not as congested. Both of these are small and simple accommodations but have a huge impact on her day to day life in middle school. 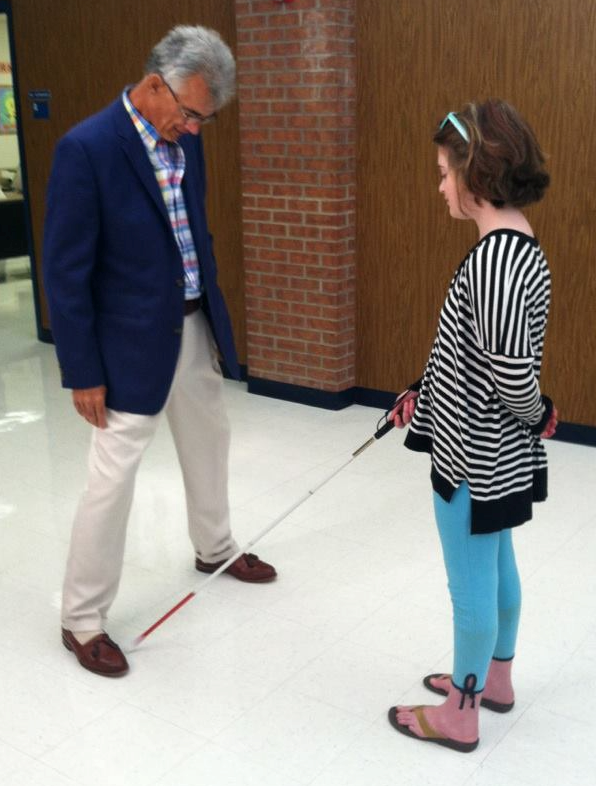 Photo of Scout participating in cane training with Orientation and Mobility specialist, Steve

We had our transition to high school ARD meeting in April. Paula and I laughed after the meeting because the two most common phrases in the meeting were “Scout is amazing” and “Is that coming with her? (in reference to her assistive devices and reams of blue colored paper). Scout will be in the opening class of our high school’s ninth grade center (campus). We already have arrangements to tour the building before school starts and have our annual meeting with teachers. The principal is excited to have Scout in his building and is already making arrangements for her to be successful. We are looking forward to a new season with many new adventures, not the least being Scout’s participation in the high school marching band’s color guard. Friday nights will be very exciting for the ‘Bergs – a percussionist, an athletic trainer, a member of the color guard and two very enthusiastic parents cheering from the stands. 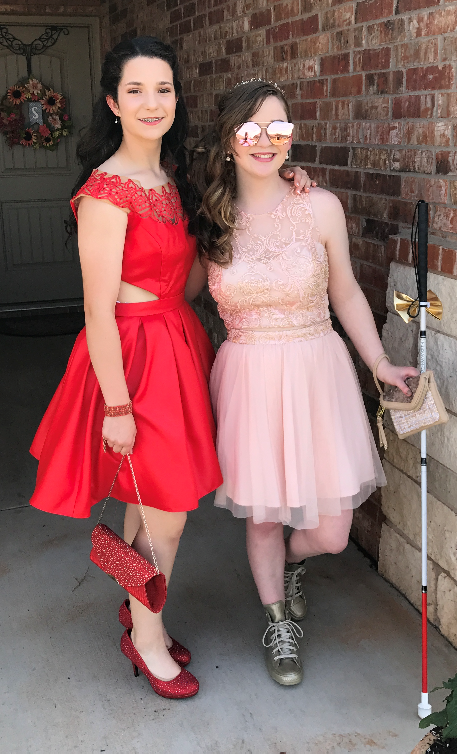 Photo of Scout with her cane, Zeus, before their 8th grade banquet

Would a Service Dog Be Beneficial for my Child?