Share:
Abstract: This article shares information from two studies confirming that 100% of Brazilian infants with confirmed and suspected Zika were born with visual impairments.

Although one of the most serious consequences of the Zika virus (ZIKV) in infants is microcephaly, there is a broad collection of anomalies now known as congenital Zika syndrome (CZS). Some of the most serious are ophthalmologic, including macular scarring, retinal defects, low visual acuity, strabismus, and nystagmus. Two papers published in the Journal of the American Association for Pediatric Ophthalmology and Strabismus (AAPOS) evaluated visual function among infants with suspected and confirmed CZS. Both studies found that while about 40% of patients had ocular abnormalities, 100% of children tested had visual impairment. Thus, cortical visual impairment might be the most common cause of blindness among children with CZS.

In a study conducted in Brazil, 70 infants with microcephaly were examined at CAVIVER, a nongovernmental organization clinic and referral center dedicated to visually disabled children in Fortaleza. A team of ophthalmologists, neurologists, geneticists, and pediatricians, led by Marcia B. Tartarella, MD, PhD, Department of Ophthalmology and Visual Science, Federal University of Sao Paulo, Sao Paulo, Brazil, evaluated the infants from January to May 2016. Twenty-five had ophthalmologic changes: 18 with intraocular abnormalities, including macular chorioretinal atrophy, mottled retinal pigment epithelium, and optic nerve pallor; seven with strabismus or nystagmus without intraocular abnormalities. Eleven infants who could be tested for visual acuity, were all below normal range. Investigators noted that although they could not obtain specific serological tests that would confirm ZIKV infection in these patients, all were screened for other infectious conditions that could cause microcephaly.

According to Dr. Tartarella, “All systemic and ocular characteristics of CZS do not necessarily occur in the same patient. The ophthalmic features with unique anatomical characteristics may help to identify CZS in patients born without microcephaly.”

Another study, which included 32 infants born in Pernambuco, Brazil from May to December 2015 with confirmed ZIKV infection, found visual impairment in all patients. Fourteen patients exhibited retinal and/or optic nerve damage and had neuroimaging or neurological abnormalities detected at birth. Twenty-six mothers reported symptoms or signs compatible with ZIKV infection during their pregnancies, 13 during the first trimester, 9 during the second, and 3 in the third. Twenty-six infants were born full-term while six were pre-term. 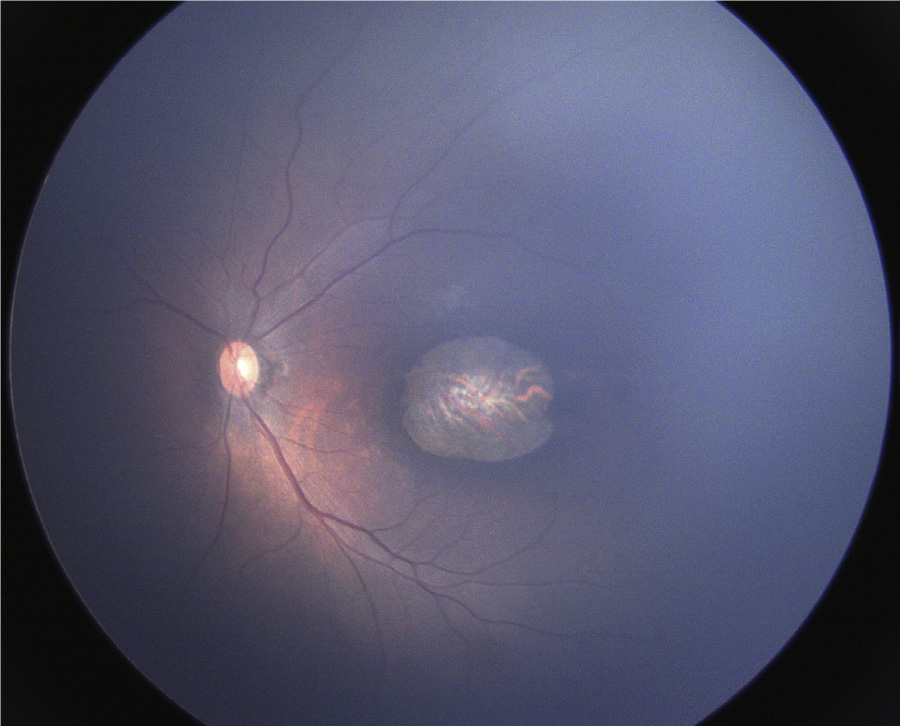 Wide-angle fundus image (RetCam) of the left eye of a child with congenital Zika syndrome showing large chorioretinal scar in the macular region.

However, according to lead investigator Liana O. Ventura, MD, PhD, of the Altino Ventura Foundation (FAV), and the Department of Ophthalmology, HOPE Eye Hospital, Recife, Brazil, such retinal involvement is not always present. “Surprisingly, the present study revealed that, regardless of fundus involvement, all infants presented with visual impairment, suggesting that the visual impairment is most likely related to the extensive damage to the central nervous system. These findings reinforce our supposition that brain damage is the main etiology for visual impairment in CZS.”

In an accompanying editorial,  (available at http://www.jaapos.org/article/S1091-8531(17)30547-5/fulltext) Sonja A. Rasmussen, MD, MS, and co-authors suggest that as our knowledge of the effects of Zika virus infection evolves, we can learn from the experience with rubella infection during pregnancy. Beginning with an astute observation in 1941 by ophthalmologist Norman Gregg, followed by descriptions of a wide array of manifestations, the full effects of congenital rubella infection became understood.

Dr. Rasmussen explains, “Limited data are available regarding the rate of ophthalmologic findings in infants born to women with ZIKV infection during pregnancy. As most studies have only carefully examined infants with presumed or confirmed congenital ZIKV infection who have microcephaly, more studies are needed to understand ocular findings in those infants with congenital ZIKV infection without microcephaly. In addition, it is unknown how often infants born without recognizable abnormalities of ZIKV infection will later develop problems (e.g., cognitive impairment, hearing loss, ocular findings), as has been seen with other congenital infections, for example, rubella.”