The Possibilities Are Endless

Share:
Abstract: A parent shares how her family finds opportunity for the Expanded Core Curriculum in her son’s participation in athletic events.

Imagine being told by doctors when your child is born that there is no chance of your baby making it, being told he is going into renal failure, needs not one but two heart surgeries, followed by more than 25 surgeries over the last 11 years. Imagine after nine months in the hospital coming home with 24-hour nursing care, an oxygen tank, having a trache tube, and having trouble gaining weight. Imagine when your baby is four months old, being told by your insurance caseworker to let him go and pull the plug. Imagine having this baby along with a twin sister, and she also needs the attention, love and support. Imagine all of that. Now, imagine 11 years later he is getting healthy, communicating with American Sign Language (ASL), walking with support and doing his first triathlon.

My son JD Bowdoin was born Sept 13, 2005 with CHARGE Syndrome. He had visual and hearing impairments (is considered DeafBlind) and needed breathing treatments every 3-4 hours with 24-hour nursing care. I was scared at the hospital and had to make some quick decisions with my husband. I know he wanted a son and no matter what, he had love for him that I had never seen.  Today they communicate through sign language and share the love of watching Texas Christian University (TCU) football and baseball. 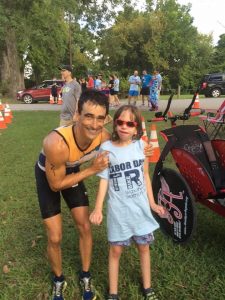 JD at an outdoor event

Over the summer, JD learned to love the water and was part of the Ellis County Sting Ray Special Olympics Team. He won first place twice at the area meet in Rockwall, Texas. On September 5, 2016, JD participated in a triathlon in Waxahachie, Texas. With assistance and lots of support, JD rode a raft for the swim, and I pushed him in a stroller for the bike and run. As his mother who loves to run and is always inspired because of JD’s “not giving up” motto, I got to swim with him and run the last part of the race. It was so emotional, since 11 years ago I was in the hospital not sure of what was going on with my twin babies. Today all those worries and “what ifs” are a thing of the past, and a full life is possible for him and his family. 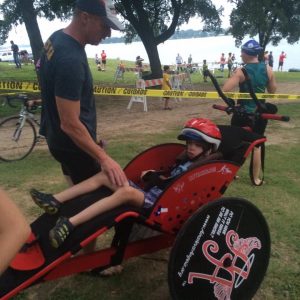 JD sitting in a bicycle trailer

In the educational setting JD has specific goals that are supported through Expanded Core Curriculum, (ECC) that are addressed in annual meetings. We were able to take the ECC in the classroom and push it outside the educational setting through a program known as Ainsely’s Angels of America. Ainsley’s Angels’ goal is to build awareness about the special needs community through inclusion in all aspects of life, by promoting awareness, providing education, and participating as active members in local communities. Ainsley’s Angels does this by giving kids of all abilities across the US the opportunity to participate in races and events.

Our family’s ability to participate in Ainsely’s Angels was made possible with the help of Rick Phelan, who calmed my fears and worries and did the triathlon with JD. JD had so much support from coaches, Kelly Rozier – owner of Buffalo Creek CrossFit in Waxahachie, John Zabojnik – an IRONMAN competitor; and the Waxahachie Running Club and Triathlon Club. Some of the comments about JD were how much he was smiling, clapping every time he saw a fellow runner and laughing every time Rick would go over the bumps. 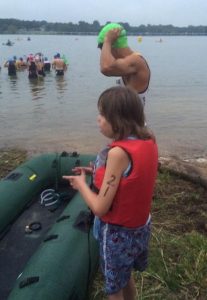 JD about to board an inflatable canoe

In closing, I want parents to know that anything is possible and there are people who want to run with your child and give them the smile you want to see. Today was an emotional day for my family and a day we will always remember.

Futures Planning Led Us to Touch Base: Center for the DeafBlind