Share:
Abstract: A young woman who is a TSBVI graduate describes her experience since graduation.

Blessed is the word that Kieara Maps uses to describe herself and her path in life. Kieara is a 2015 graduate of Texas School for the Blind and Visually Impaired (TSBVI). She describes TSBVI as her “first love,” a “safe-haven,” and a place to be understood.

Kieara developed an interest in the culinary arts while in high school and decided to pursue a training program at Texas State Technical College (TSTC). She said that she learned a lot while at TSTC, but ultimately decided to change her career goal.

Kieara now lives in Austin with roommates in a local apartment complex. She works as a Substitute Resident Instructor at TSBVI, while studying public speaking and communications at Austin Community College. Kieara would like to use what she learns to serve as an advocate for people with disabilities, specifically people with blindness and visual impairment. She wants people with disabilities to know that they are important and have a role in society.

When asked what advice she has for parents of children with visual impairments, Kieara encourages parents not to “hold their kids back” by over protecting them, as the parents will not always be there to intervene. In addition, she would like to encourage parents to allow their children to make mistakes, so they can learn from their mistakes. She suggests that children also be allowed the opportunity to practice/develop problem-solving skills and learn to advocate for themselves.

I look forward to hearing more from Kieara as she continues her journey in life. To be continued… 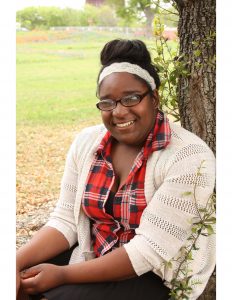 photo of Kieara sitting next to a tree

The Possibilities Are Endless