Share:
Abstract: The author shares one student’s experience participating in the NASA Space Camp for students with visual impairment.

For most kids, NASA Space Camp is an unforgettable experience. Abulusine Kamara was afraid he wouldn’t remember much of it at all. The Liberty Junior High School seventh-grader who goes by “Lee” is visually impaired. He said he has trouble remembering enough details to form lasting memories when he’s nervous or frightened — as he was in September, surrounded by strangers he could barely see at Space Camp for Interested Visually Impaired Students (SCIVIS) in Huntsville, Ala.

But Lee said he was able to settle his nerves through a daily calming exercise.

As he recalls Space Camp now, Lee walks through an orderly mental list of details to help him reconstruct the experience. When asked the first thing he remembers about the camp, he starts from the beginning — getting off his first plane ride without his parents; picking up his luggage at baggage claim; riding over to orientation.

Through these details, Lee is able to reflect on the challenge of balancing the camp’s agenda, keeping up with schoolwork from back home, making new friends and overcoming that initial fear.

Mary Ann Siller, a Richardson ISD teacher for students with visual impairments, said hands-on experiences like this space camp can help students take a step forward in their learning. She said she has observed similar progress in Lee in the time since he attended the camp. “The impact of vision loss can be really profound [on learning],” Siller said. “It distorts what that child’s images of the world are, and perception.”

One of the camp missions, as Lee remembers, was to construct a cube-like object in an underwater environment. Crediting teamwork, Lee said he and his group of other children with visual impairments were able to successfully complete the mission. “It was quite an achievement,” Lee said. “We felt proud of ourselves — about [what] we did and the team that we had.” 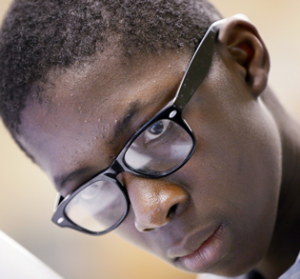 In another key moment, Lee said he served as commander of a simulated landing mission. He had to learn a script of commands and buttons to press, and communicate it step by step to his crew. With a bump, the simulator informed the crew it had landed the craft successfully.

Although the number varies, about 20 kids from Texas attend the SCIVIS camp each year, said Jim Allan, accessibility coordinator for Texas School for the Blind and Visually Impaired in Austin. Allan said the experience can be a huge confidence booster for kids who are used to being treated according to their limitations.

“That’s what makes Space Camp so cool, because there are no limitations,” Allan said. “You can fly the shuttle. You don’t have anybody telling you ‘You can’t do this,’ or ‘You can’t do that.’ … It really affects them.”

The camaraderie established in the missions carried over to the campers’ free time, Lee said.

“At first I didn’t know who they [were], so they told me their names [and] I told them my name,” he said. “Then we talked about what we like to do. We had some things in common, so I just got to know them for a short time.”

This type of connection is rare for visually impaired students, who are often the only ones in their classes and home environments dealing with their particular disability. “We’re used to seeing people who look like us, no matter what shape we’re in,” Allan said. “But … the population of blind people is not that big, so they may never come across another kid who’s blind.” 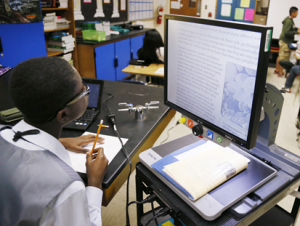 Lee Kamara using a video magnifier to read a textbook.

To help pay for the camp, Siller helped Lee apply for a grant from Northrop Grumman Corporation, which offers Space Camp scholarships for visually impaired students in the greater Dallas area and selected parts of the country.

At Liberty Junior High, Lee is enrolled in regular classes. He uses special telescopic magnification devices to hone his vision so he can see what’s on the board. Siller also checks on him regularly.

His main extracurricular activity is playing trumpet with the school band. His favorite way to spend time, he said, is playing outside with his brother when he gets home from school. Although Lee hasn’t settled on a career down the road, he expressed serious interest in becoming an architect of devices that make people’s lives better — possibly in health or another field.

No matter the path he chooses to take, he said his experience at Space Camp will help him moving forward. “It helped me the most [with] my schoolwork and what I would be doing next in my future if I wanted to do things by myself,” Lee said.

I Want You to Know: My Reflections on Publishing a Book