Share:
Abstract: Camp Abilities is an overnight, developmental sports camp for children and youth with visual impairments, blindness, or deafblindness. Their first goal is to empower blind, visually impaired, and deafblind children and youth to become active in sports.

On July 4, 2015, a unique set of athletes and coaches celebrated not only the birth of this country, but also a very special anniversary. During the week of June 28, campers and counselors at Camp Abilities commemorated the camp’s twentieth season, culminating with a reunion on July 2 for former campers, counselors, and staff. Camp Abilities has now helped an entire generation of children to discover just how much they are capable of.

A Place to Play—and More

Each summer, campers—or “athletes” as they are called—at Camp Abilities’ 17 U.S. locations and six international locations learn to play adapted sports like goalball, beep baseball and beep kickball as well as more mainstream sports like tennis, archery, tandem biking, kayaking, swimming, and track events. Sport specialists lead the activities, and each athlete works with a counselor or “coach” who provides one-on-one instruction and mentoring throughout the day. For many of the athletes, their time at Camp Abilities marks the first time they have ever played sports. “Before camp, many participants are unsure of their ability to participate in physical activities,” the camp’s founder, Dr. Lauren Lieberman notes. “Ultimately, the children learn that they are athletes.”

At Camp Abilities, they not only blossom into athletes, but they get to do so with peers like themselves. From this, lasting relationships are born. “It’s like a family,” says former camper and now coach David Briggs. “Every year is like a big reunion.” According to Dr. Lieberman, marriages have even resulted from bonds that were formed at Camp Abilities.

These bonds extend to the coaches as well. Each coach gets to know his/her assigned athlete so that s/he can tailor instruction specifically to that athlete’s unique needs. Beth Foster, a long-time coach and now assistant director at two Camp Abilities locations, described how she learned to communicate with a deafblind athlete by signing into his palm and even by making up her own signs. By the end of the camp session, the athlete had gained enough confidence to scale a challenging rock-climbing wall and to jump off a diving board. “I was pushing him to the limit that every athlete gets pushed to, and he just wouldn’t give up,” she says proudly. Foster has been so inspired by the experience that she is now a Certified Adapted Physical Educator (CAPE) and is working toward a doctorate in adapted physical education and kinesiology at Texas Woman’s University.

By the end of the camp session, athletes and coaches are all “crying with emotion,” according to Dr. Monica Lepore, who helped Dr. Lieberman found Camp Abilities Brockport and later founded a Camp Abilities in West Chester, Pennsylvania. “The coaches are always overwhelmed by the transformation in their own lives and in the children,” she says. 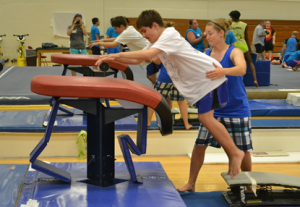 Photo of a student doing gymnastics.

It might be hard to imagine how children with visual impairments can play mainstream sports, but Camp Abilities has its techniques down to a science. Athletes start out by playing games that incorporate touch-based communication and auditory cues. They use a tactile map of the court to get an idea of its dimensions and positions.

Then, the athletes move on to playing modified versions of mainstream sports (including modified versions of Wii games in the evenings). For the 50- and 100-meter dashes, for example, some athletes hold onto a waist-high guide-wire that extends the length of the track, while others are able to see special high-contrast markings on the track. For longer races, athletes may use a shoelace or short rope called a tether with sighted guides who run alongside them. The athletes also learn strategies to modify sports and recreation activities for their specific visual needs, as well as advocacy techniques to ensure that they are included in sports at their schools when they want to be. At the end of camp, each child receives an in-depth assessment of his or her performance, achievement, and abilities in the sports and recreational activities. This information can be shared with his/her parents and physical education instructors.

To help the athletes get there, hundreds of students volunteer as coaches. These students are studying to be teachers of students with visual impairment or are enrolled in various relevant programs such as physical education, adapted physical activity/education, special education, orientation and mobility, and intervener training programs. Before camp starts they receive over 12 hours of training in specific techniques for teaching physical education, sports, and recreation skills to the athletes. The training benefits not only the athletes at camp but also thousands of other children, because the coaches continue to apply what they learned at Camp Abilities throughout their teaching careers. 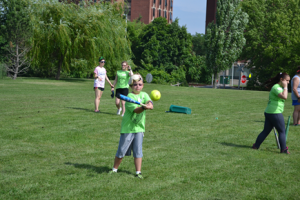 The Four-Fold Mission of Camp Abilities

Camp Abilities’ first goal is to empower blind, visually impaired, and deafblind children and youth to become active in sports. But the organization has other ambitious objectives, too. As its founders see it, Camp Abilities serves three additional purposes: 1) to educate undergraduate and graduate students and teachers about teaching children with visual impairments, 2) to conduct research on best practices in physical activity among children with visual impairments, and 3) to provide support to the families who care for children and youth with impairments.

With its in-depth training of coaches, Camp Abilities has become a world leader in providing field-based training for professionals working in this area. The training addresses eye conditions and their effect on participation and learning during physical activity, facilitation of orientation and mobility concepts, developmentally appropriate ways to interact with children, assessment and record-keeping, and the introduction of the sports themselves.

Camp Abilities wants to extend its influence beyond its coaches and athletes, and so several research projects are conducted each year at Camp Abilities Brockport to learn more about physical activities and intervention strategies that work for people with visual impairments. Many of these research projects have exposed athletes to state-of-the-art technology—such as talking pedometers—that can enhance their physical activity experience. Camp Abilities has also contributed numerous books, practical and research articles to the fields of physical education, adapted physical education, and teaching for individuals with visual impairments. “Everything we produce helps kids who are not involved in our camps, so our camps have far-reaching effects on all children with visual impairments,” says Lieberman.

Last but certainly not least, the support Camp Abilities provides for the families of children with visual impairments means a great deal to these dedicated caregivers. This support can extend beyond the camp session, because when the children return home, they are more able, independent, and confident in their abilities. At camp, they have learned to try new things and take risks; they are therefore more willing to do the same in “real life.” “We show the families what their child is capable of doing with just some small modifications,” Foster explains. “To hear that they can do (these things) must be empowering for the families as well.”