Some time ago, a Teacher of Students with Visual Impairments (TVI) shared information about one of her students. This child was eight years old, identified as visually impaired (VI) with no additional handicapping conditions, and enrolled in a general education second grade class. Her early educational experiences had been disrupted but she had made progress in braille and knew all the whole word contractions. In addition, she demonstrated good comprehension and verbal communication skills. Her reading rate was well below average, however, and she did not maintain focus on an assignment unless closely monitored and constantly prompted by an adult. The TVI expressed some confusion as to why this student, who seemed to have all the prerequisite skills, was unable to work at a level commensurate with her peers. The teacher was very concerned with this apparent lack of motivation or interest in learning and felt that this behavior was further distancing the child from both classmates and teachers. The last statement caught my attention. When we spoke, the teacher shared that the student was very immature for her age; she did not independently initiate or maintain age-appropriate interactions with her peers, her topics were generally self-centered and focused on limited topics, and when left to her own choices, she typically played alone and chose activities that were more typical of a much younger child. She also had frequent bouts of disruptive behavior that the teacher characterized as “tantrums”.

I’ve found this profile—that of a student with all the prerequisite skills in braille but whose marked lack of participation and engagement in class has limited his or her progress—to be fairly common. Often, the situation is viewed as a “behavior issue” with the implication that it is the result of certain attitudes and choices on the part of the student. The “behavior issue” is often addressed by setting expectations that grade-level assignments will be completed and by providing rewards and/or consequences for compliance. For the student and for the teacher, the approach is not successful: student behaviors become more pronounced or extreme and there is a corresponding increase in the level of the teacher’s response. All parties continue to escalate and the problem is worsened instead of alleviated.

In these situations, it may be helpful to view things from a developmental rather than a behavioral standpoint. Using this approach, we consider that there is always a functional aspect to a child’s actions. What the child does or doesn’t do communicates information about their needs, about what they are ready to do and what they are not ready to do. This directs us to provide instruction that targets the child where he or she is developmentally. Targeting skills at higher developmental levels will not be effective because skills develop sequentially. Earlier skills provide the base upon which higher skills are built. Higher skills cannot be built if foundational skills are not in place.

With braille instruction, we typically look at the development of skills and knowledge in the cognitive and physical areas. However, one factor often overlooked is that of the child’s social and emotional development. This goes beyond simply identifying a child as being immature or having behavior issues and looks at actual assessment of the child’s level of social and emotional development. Literacy instruction is organized to accommodate for needs at that level. The types of things in which a student likes to engage independently, without support or prompting, is a good indicator of his or her social and emotional levels. Observe the child during unstructured time and note their behaviors and choices. Notice how the child responds to or initiates social interactions. These can be compared to developmental scales to determine the current level of needs. It also helps to simply provide more of what the child is seeking.

Like other developmental areas, skills in the social and emotional domains occur sequentially, with beginning skills creating a platform from which later, more sophisticated skills grow. If, for some reason, a prerequisite skill is inadequately or incompletely developed, the child will have difficulty acquiring the skills that are appropriate for his or her age. A student may be cognitively and physically capable of engaging in third-grade classroom activities but not be emotionally ready. Third-graders, for example, are expected to engage in topics that are of the teacher’s choosing and to do so for extended periods of time. Students read passages and respond extensively to questions about the content. For a student functioning emotionally as a two-year-old, this would be confusing and exhausting.

In the scenario described at the beginning of this article, we determined that the student’s behaviors were more typical of a two-year old. For a typical two year old, successful activities are child-centered and child-led; they must be of high-interest and self-referential. A two year old is in the sensorimotor and preoperational stages of learning and is typically engaged in self-directed, exploratory activities. A two year old is not yet socially ready to be responsible for his/her own learning. It is critical that the adult spends time in bonding and interaction activities with the child who is at this emotional developmental level in order to develop a trusting relationship and to build basic self-regulation skills.

Using this developmental approach, the teacher began to spend a great deal of time playing games and engaging in topics of the child’s choosing. Doing this required that the teacher expand her concept of what constitutes “teaching”. While these interactions did not look like typical instruction for a second-grader, they were setting the developmental stage for more age-appropriate learning to occur. Novel activities and topics were offered and the child was allowed to reject them. Braille instruction was slowly brought into the mix by incorporating it into the games and topics the child had self-identified as important. Support was also provided by the school’s “Intensive Behavioral Continuum” classroom, which further focused on the student’s emotional and social needs in a consistent and ongoing manner.

Two comments made by the teacher stood out to me: First, she mentioned that she realized how little she knew about her student before and that she had never really taken time to get to know her as she was, rather than as she wanted her to be. Second, while the amount of braille work the student produced independently was initially quite low, it was actually on par with the output she had previously achieved through prompting and support. In addition, the amount of independent braille production increased substantially over time. The takeaway, for me, was that a more positive relationship between a teacher and student, combined with the student’s experience of interest and success, resulted in higher levels of achievement and readiness for more challenging goals.

One and a half years after beginning to implement this approach, the TVI reported: “She is doing fantastic, and is now reading and writing on grade level, and participating in grade level math lessons! Math calculation is still way below grade level, but she is making progress with the abacus. Resource has been removed from her services. It’s been amazing how her academics have grown since her emotional needs have been addressed. . . . Of course, we do have set-backs. . . but overall she is doing super great.  We can teach her so much now!” 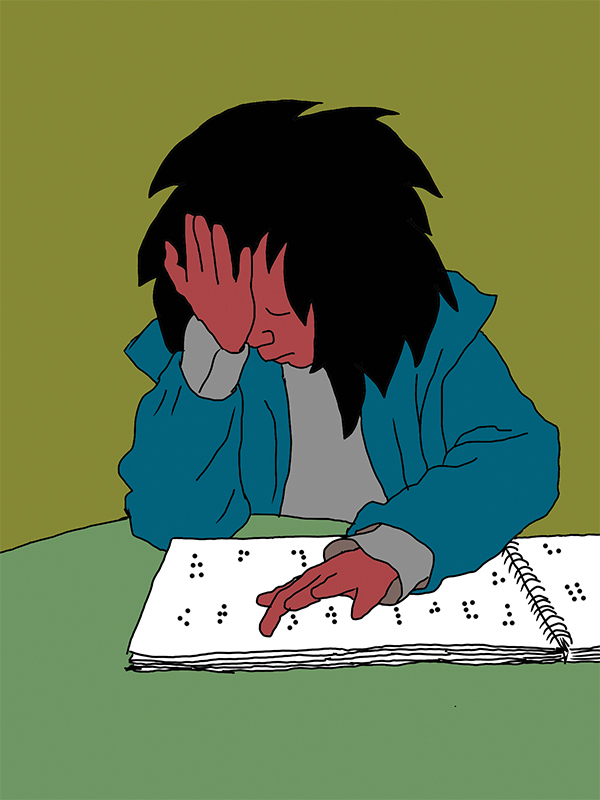 Drawing of a sad braille reader 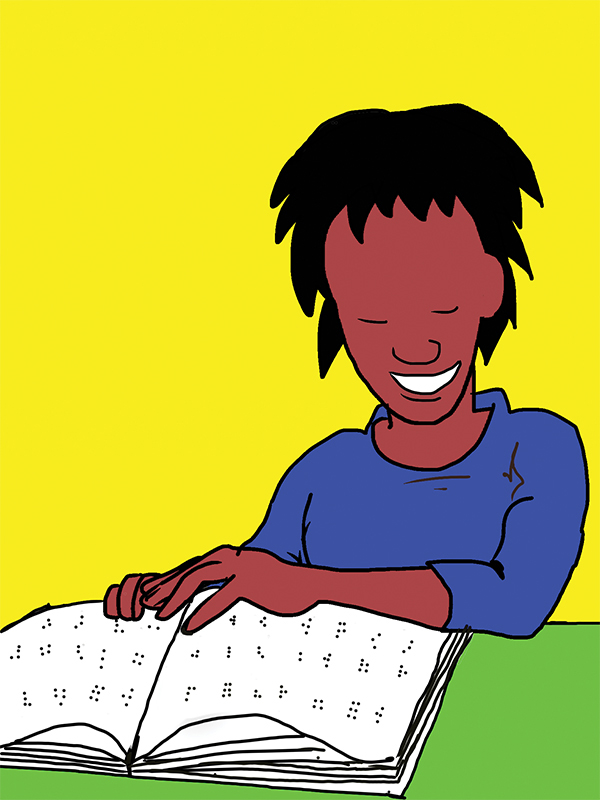 Drawing of a happy braille reader

Accessing Self-Determination Through a Creative Process