Find out more about the Texas School for the Blind and Visually Impaired's 150+ year history.

The Texas School for the Blind and Visually Impaired was established by the Sixth Texas Legislature on August 16, 1856, as The Blind Institute, with five members of the board of trustees appointed by Governor Elisha M. Pease. When Governor Pease took office, there were few schools for the blind in the Southwest and, in fact, only a handful in the US—less than 20. In 1856, when TSBVI, the School for the Deaf, and the Insane Asylum were created, there were less than 1800 people living in Austin. In November of 1856, The Blind Institute rented the house now known as the Neill Cochran House on San Gabriel St., six blocks from the Capitol. This location was at the residence of Mr. W. L. Hill, who leased the premises for the purpose of establishing a school for the blind.

It was at that house that the first pupil arrived, one Robert McKeachern, on December 29th of 1856. As a 17-year-old teenager, Robert couldn’t get away with much as he was under the thumb of the Governor’s personal physician, Dr. S.W. Baker, who became our first Superintendent. By the end of the school year in 1857, the school had a total of seven students and one teacher. In comparison, today, TSBVI serves almost eleven thousand students through on-campus instructional programs and outreach services across Texas.

Originally, students were expected to work while at the Institute, making brooms and other marketable products. During the forty years following the Civil War, the superintendents for our school emphasized vocational skills. These leaders also believed in physical education, and every student was required to participate in physical fitness on a daily basis. This was usually a recommendation from the physician on staff—and in the formative years of our school, that physician also happened to be the superintendent.

The second location of the school was Block 71 of what is presently known as the Little Campus of the University of Texas. The Little Campus is now known as the Arno Nowotny Building. The cost of the new facilities was $12,390.00 and was completed in late 1857. In 1888, a reunion of former students was held with 58% of the 24 attending being self-supporting and 42% being at home. Concerns were mentioned throughout the history of the school about the gainful employment of the students when they left the school.

There are those who will tell you that this school once had a famous visitor named Helen Keller. But there were others of local fame who were quite influential in our world. A local black leader named Norris Cuney Hare was unrelenting in his battle to create a place like ours, but for underprivileged black children. Despite never having been elected to any state position, this man almost single-handedly pushed through the Legislature the bill that would create the Institute for Deaf, Dumb, and Blind colored youths on April 5, 1887. This institute remained open until 1943, when it combined with the state orphan home in Corsicana to create the Blind, Deaf and Orphan School in Austin, where Norris Cuney Hare’s daughter taught music and wrote about their lives.

In 1905, the name of the school was officially changed to The Blind Institute by the Texas Legislature. In 1916, the school’s name was again changed by the Texas Legislature, this time to The Texas School for the Blind. A 73-acre site between Lamar and Burnet Roads was donated by the citizens of Austin for a new school for the blind, which is where it remains today. Behind this location, our farmer grew 225 bushels of corn, 6 tons of oats for livestock, 6 tons of sorghum cane for molasses, and 2 tons of hay. He also tended various 6 to 10-acre gardens, and with student help, grew beets, English peas, mustard, radishes, onions, tomatoes, squash, lettuce, snap peas, shallots, okra, cucumbers, and cantaloupes. Although the school wasn’t self-sufficient after the move to our current location, these gardens and the farm greatly reduced the school’s food budget.

Continuing problems existed with the number of pupils in relation to the number and size of the buildings. Frequent requests were made for appropriations for the construction and remodeling of buildings.

In 1965, The School for Deaf, Blind, & Orphans (black students) was integrated into the Texas School for the Blind. In the early 1970s, the Deaf-Blind program was begun at what was known as the Confederate Widows’ Home located on Cedar Street and 35th Street in the Hyde Park neighborhood. In the early 1980s, the deaf-blind program was moved onto the present site on the main campus and the Confederate Widows’ Home was sold. The proceeds from this sale were used for a new facility for the deaf-blind program on the main campus.

The year 1975 marked a turning point in the population served by the Texas School for the Blind. The Texas legislature enacted H.B. 1673 adding statewide responsibilities to the schools enabling statutes and mission. Governance of the School was transferred from TEA to a subcommittee of the Texas State Board of Education. The U.S. Congress enacted the Education of All Handicapped Children Act, significantly impacting the provision of special education services to children, guaranteeing a free appropriate public education to all disabled children in the least restrictive environment. One effect on the school was an increase in the number of children with multiple disabilities requesting the services of this school. Before 1975, all students served at the Texas School for the Blind were academic or applied academic students. Since 1975, the population of students with multiple disabilities has continued to increase which, in turn, has caused a shift in programs at the Texas School for the Blind. The school was renamed in 1989 to Texas School for the Blind and Visually Impaired to more accurately reflect the population it serves.

The 100-year-old campus at 1100 W. 45th St. underwent a complete remodel under Superintendents Dr. Phil Hatlen and William Daughterty. The final building was completed in 2019, with only one original building remaining. Also in 2019, over 150 years after the school was established, Emily Coleman became the first woman to serve as TSBVI’s superintendent. 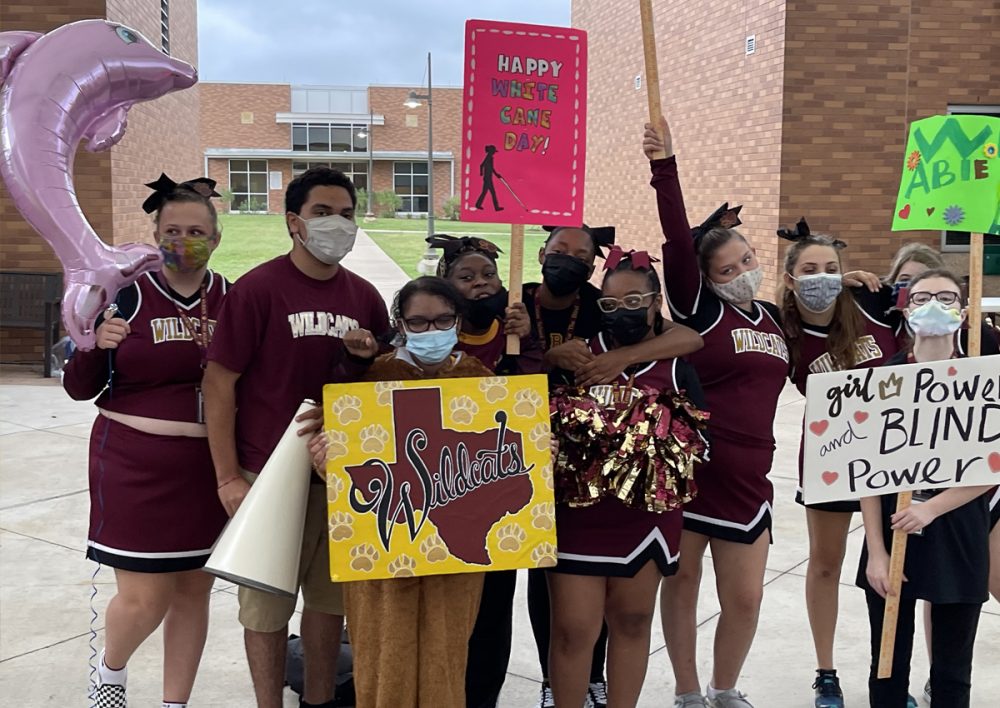 Find out ways to support TSBVI through volunteering, internships, and donations.